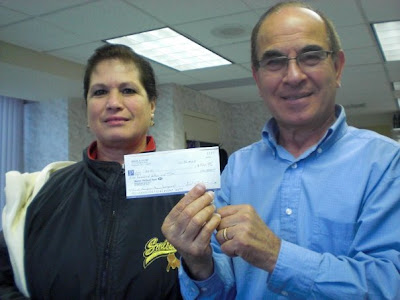 Above is a picture of Sam and his wife at the Ellicott Square Hair Salon. They paid off the mortgage on their home today!

Sam and his wife cut Howard's and my hair! We do not know the name of Sam's wife. Once Howard asked him what it was and Sam said do not bother to learn it, we could not pronounce it. 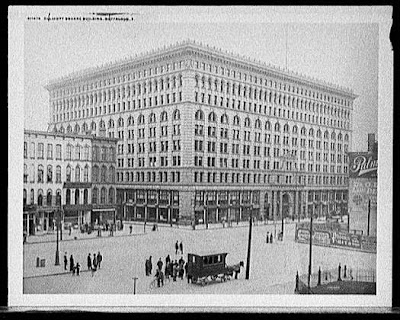 ... with a lobby with a mosaic floor that looks like this: 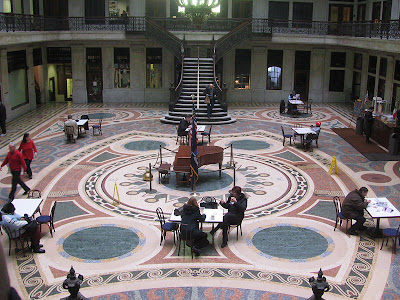 ... but it is also cheaper than on Transit, is the beautiful thing.

We figured Sam was a made-up name and sure enough, we are right. That is because Howard took the picture and blew it up and on the check we can read that Sam's real name is Ismail! And his wife's name is Nafiza.

Nafiza speaks no English. She has been here forever but when she tips your head back into the sink and asks if you want it hotter or colder forget about answering, because it does not matter. That is OK because she always gets it right anyway.

But Sam is a different story. He can talk. And he has been at the Ellicott Square Building for 42 years now. Cutting the hair of and yakking with politicians, reporters, judges, priests, lawyers, secretaries, physicians, taxi drivers, nurses, public servants, you name it. Everyone goes in and out of that shop. I have been there and I have seen it.

Leonard Pennario probably got his hair cut at the Ellicott Square Hair Salon!

We should sit Sam down with a beer and get him talking!

Meanwhile here is another update on Howard's downtown activities. All I did today was sit inside and work on the book and that is funny, it is like sleeping, it is as if the day never happened.

Howard took this picture of the situation on Delaware Avenue downtown what with the cornice of the Statler having fallen down. 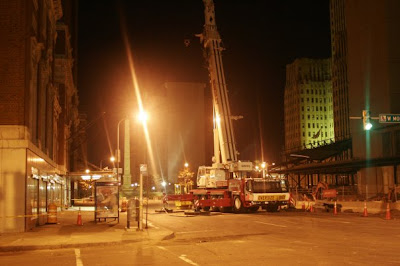 Watch your head, everyone!
Posted by Mary Kunz Goldman on October 30, 2009

I love Burnham's buildings... Buffalo is lucky to have this gem!

Bill, isn't the Ellicott Square Building great? Sometimes I go out of my way just to cut through it. It always cheers me up to walk across that mosaic floor.