The Statler and me 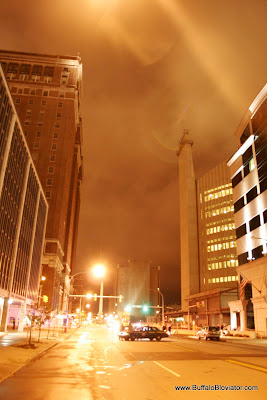 I feel bad for those folks at the Statler because that cornice fell off and smashed and now the street is closed off and everyone is blaming everyone, Buffalo style. 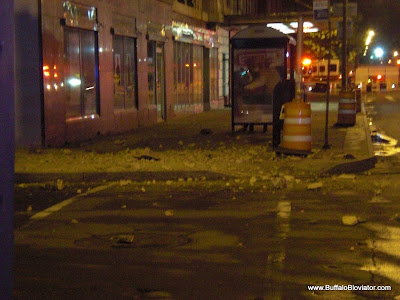 Above are pictures Howard took on the scene of the disaster. He is always on the scene of a disaster which is why he was attracted to me and my life! So he took that picture above with that fantastic sky. When Howard came home lastnight there was a car wreck in front of our house and he took a picture of it too. 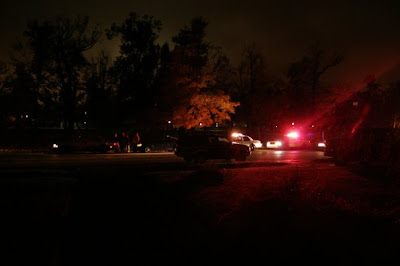 Back to the Statler. Now the owners will have to replace that cornice. And they have just bought the building. They can still back out. Although they would lose their deposit, which in Buffalo is a real no-no.

I sympathize with them.

It reminds me of when I bought my house!

When I bought my house I was single so I was in it by myself. And maybe the third night I was in it there was this gigantic BANG in the middle of the night. And this huge fireball, right before my eyes.

I sat up in bed terrified!

What had happened was, lightning had struck this tree next door. There was tremendous drama. Fire trucks came whipping around the corner and were sitting in front of the house, which was more or less unoccupied at the time. I remember running downstairs in my pajamas in case the firemen needed to ask me anything. But they did not. Nobody asked me anything and eventually I went back to bed.

But that was not the end of the story! A few days later I was sitting at work and my friend Mike called me.

"That's too bad about your house," he said.

My blood ran cold. "What about the roof of my sun room?"

And I learned that a corner of it had fallen off.

Mike opined, and he was right, that what had happened was a branch from the tree that had been struck by lightning came down on the roof of my front sun room. Great!

Ten minutes after that my phone rang again and it was my friend Lizzie.

"I just drove past your house," she said. "I can see what you're so upset about!" I always remember that, because it meant my friends were talking about it. Somehow they had it that I was upset. Whereas I had only just heard about it.

That was when I started to cry. I was on the copy desk at the time and my boss kindly said that maybe I should go and see what had happened to my house. So I did. It was not pretty, I will tell you that. I know, things could be worse, I could live in California where they have earthquakes. Leonard Pennario used to tell me about this earthquake that broke a water main where he lived and destroyed a lot of his his stuff. In the grand scheme of things my situation was not that bad.

But it was not fun having to go through the Yellow Pages and find a roofer seeing that I knew nothing about that and I was single as the day was long.

Eventually I found this roofer named Waldemar Tiedemann. That is a wonderful name! It is like something out of "The Ring of the Nibelungs." Well, that is a whole other story.

I hope the new Statler owners come to feel the same way.
Posted by Mary Kunz Goldman on October 28, 2009

Hi. I'm one of the few tennants left in the Statler. It's business as usual today. The Mohawk and Niagara Square entrances are still open. As far as the buyers of the building, if you look up at the building, it is clear that this type of thing has happened before and seemingly quite often. There are many pieces missing all around the top of the building. I think the buyers were aware of the problem. No one is to blame. It's an old building.

Mr. Tichell, it is an honor to hear from a tenant of the Statler! Howard's dad once had his office there. Thanks for the update on the streets situation! See you downtown!

We happen to be neighbors. We are two doors down at 153 Delaware Ave. My father had a CPA office in Suite 203 for years when I was growing up. I am so glad that so many of you stayed on. Our friends, Peter Weinmann and Joel Daniels, have not left the Statler. And Greg has been working there for what, 40 years? With 15 good tenants and steady banquet events, the Statler was a viable going concern and I am not sure why the bankruptcy trustee tried to chase them out with those confusing eviction notices.

I agree with you about the cornice. Even well financed, expensively maintained historic buildings such as our Karpeles Manuscript Library Museum at Elmwood and North have masonry issues from time to time. Last year they had to shut down Elmwood because a large area of the brick work suddenly fell. The Statler is in much better shape now than it was 25 years ago when my dad worked there. It is wonderful to see it making a comeback.

How about demolishing this “historical architectual gem” and building something better. To all you history buffs, who is goint to pay to “save” this POS building. I work nearby, and I’d like to be save from being stoned to death. Grow up people. It is time to move on and demolish this place. If you are the one suing everyone in the brother trying to save this "Stadtler disaster", then you better come up with the money right away to fix it. It is precisly people like you why Buffalo looks the way it looks. Demolish all abondoned "historical" building. Move on people. Gosh.

For the record, I'm not Anonymous. Whoever it is, I think this Anonymous reasons on the same level as he or she spells.

Prof. G,
My name is Pawel, I can provide you with my full name and phone number so you can call me so we can discuss this "piece of history". By the way, I work nearby, I walk that sidewalk daily. Perhaps you can tell me how I can protect myself from being killed by a building that is falling apart in the center of the city I care about. By the way, prof., you still did not explain how you'll come about getting $100 million to save the tower.

And Pawel, thank you for giving your real name! Welcome to the Web log.

Thank you Mary,
I am not trying to flame anyone. I love Buffalo and would like this city to "raise from ashes" so to speak.

Dear Pawel, I never saw you as a flamer (?) and I don't think Prof. G did either. I appreciate your civility! We all enjoy a good Buffalo argument. Thanks for contributing. p.s. if you're downtown today, watch your head. ; )