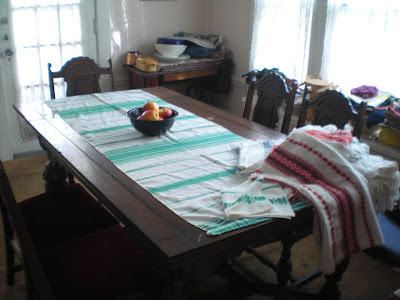 Major score at an estate sale! I got a heap o'Hungarian linens, many of them beautifully embroidered, all of them trimmed in bright colors. One of them was a runner which, I have been looking for one. That is it up above! I should really iron it but you get the idea. It does not drape over the edge of the table but it does reach exactly from end to end.

Here is a closeup of the haul. 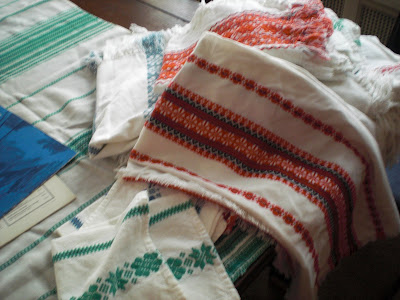 At the Williamsville sale where I discovered these treasures there were these people nearby sitting on a couch, talking in a foreign language. Suddenly they interrupted their conversation and asked me, in English, "Are you Hungarian?"

I was startled and I said, "No, I'm German. Do I look Hungarian?"

That was when I realized they had been speaking Hungarian. They thought I was Hungarian because of my delight over these napkins!

I wrote that on Facebook and my friend Marta said I could be an honorary Hungarian. That is a big compliment because Marta is the ultimate Hungarian. Well, there is also my friend Michelle who is also Hungarian. I have always surrounded myself with quality people and that inevitably means Hungarians. I love Hungarian culture particularly Lehar. There is this great story I have about myself and Lehar and a Hungarian doctor but that will have to wait.

Speaking of music, I also snapped up this record for $1. 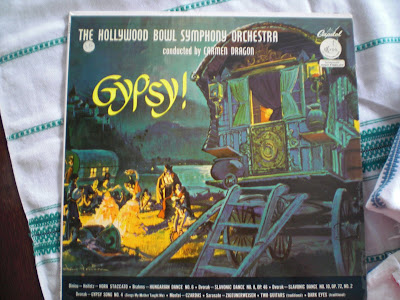 Isn't that a great cover? My mother was with me and she would have grabbed it up but I beat her to it. It is a Capitol record. I am starting kind of to collect Capitol records because of their association with Leonard Pennario. Pennario was a great star for Capitol as you can see from the back of the album, where they can be observed hyping Pennario's "Concertos Under the Stars." I did not see that till I got home and I loved it. Click on the picture to read it better. 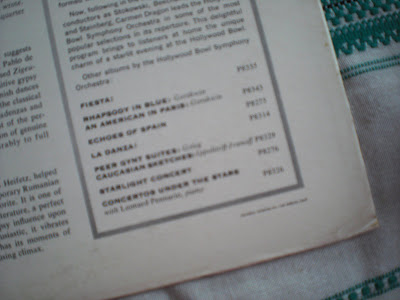 That was two years ago today I went out to California to see him. I always remember flying out there on Halloween night to sleep in the apartment where somebody died.

Today was a magical day like that one and I am going to commemorate it by having a party where we use my Hungarian tablecloths and napkins and I make ghoulash and we sit around listening to my Capitol "Gypsy" record and Pennario playing the music of Hungarian geniuses including but not limited to Liszt and Rozsa. It will be my first official act as an honorary Hungarian.

Rejoice with me on my new haul!
Posted by Mary Kunz Goldman on October 31, 2009

Oh my. Here I am playing catch-up once again due to interior house painting. Spray painting! Empty house for several days! Ok...

When I was a kid, our family doctor was (I think) Hungarian. Later, after I was married, he delivered our son (this I know). It seems like his name was Dr. Ernst Schweiger. He is long gone now but was a family doctor of ours for a great many years having practiced well into his eighties. Oh, and he sure did like the ladies, lol!

Wow, that' a pretty clean copy of that LP!

a Hungarian in the UK said...

It is so nice to see that people appreciate a piece of Hungarian culture on the other side of the world.

thank you for that.