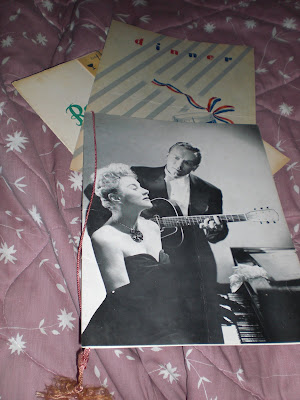 Today is Howard's birthday so I gave him a souvenir menu from when Hildegard played the Buffalo Statler Hotel. Above is a picture of the menu! Observe the tassel.

They had the wildest appetizers. You could not find them now! 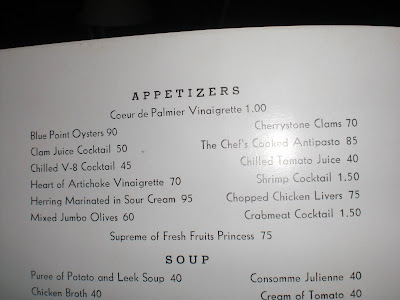 "And the lady will have the herring marinated in sour cream." Imagine saying that. Someone would probably faint.

Howard has gotten into the habit of ordering for me because that is what Leonard Pennario used to do and I told Howard about it. Pennario would find out what you wanted and then he would tell the waiter. That is the proper way to do things and it is the way people operated in the 1940s and 1950s. In the era when Hildegard played supper clubs.

It must have been fun to go out on dates back then! Do click on that link I just gave you. It is of a brand-new video someone just posted on YouTube of Pennario's "Midnight on the Cliffs," which became the soundtrack to the 1960 movie "Julie."

Speaking of that bygone era I also gave Howard this menu from a historic restaurant on Main Street that my mother remembers. 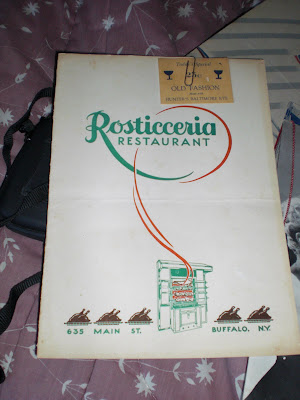 What treasures! What a haul! I found these menus at the same sale where I found the autographed picture of John Gilbert.

It has been terrible to have to keep them secret for all this time!
Posted by Mary Kunz Goldman on August 31, 2009

The Rosticceria became Buffalo's first Swiss Chalet.. Same sort of deal. The best presents come from tag sales. My Grandmother bought me an Iroqouis Beer Light for Christmas when I was 9 years old from the Antique Store in the SKYROOM Building on Seneca Street.

Ah Swiss Chalet on Main Street, I remember that place VERY well...best chicken in town. My parents took us there to eat about as soon as we learned to walk.

To me, the herring marinated in sour cream sounds like one of the more appealing appetizers on that menu. The "supreme of fresh fruits princess" might also be a good choice, if only I knew what it was. I'll have to consult my vintage cookbook collection.

Denise, I ate in that Swiss Chalet too! It brings back high school days. I did not know that was where the Rosticceria was. Thank goodness for Steve Cichon. He is such a resource!

Ryan, you have a vintage cookbook collection? In addition to your vintage phones??? I am agog!

I looove herring and sour cream. Reminds me of my dad (from Germany)

The last time I went to a Swiss Chalet, they had changed the recipe of the Chalet Sauce! It was no longer thin and watery, instead it had a gelatinous consistency, and the flavor wasn't the same. Oh, and the rolls were different. That was a few years ago, and I haven't been back since.

The Rendezvous Room at the Statler Hilton Hotel. Mom and Dad went there on their rare nights out on the town. Hildegard was their favorite. 60 cents for oysters! Ladies in hats and nylon stockings. Those were the days my friend.

It's a date! When a time machine is invented, we are all on it, going back to the Rendezvous Room to hear Hildegard and dine on herring and sour cream and Supreme of Fresh Fruits Princess.