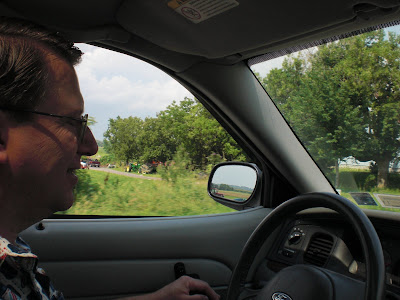 What with all the excitement yesterday about Fourteen Holy Helpers, I forgot to mention that on Sunday we went to a party at my friend Lou Michel's house. He lives out in Wilson which is God's country. Above is a picture of Howard driving through God's country! It is a rare picture because Howard does not pass the outer limits of the City of Buffalo very often.

Whole days can pass without his leaving our Zip code. He has not left our area code in something like 10 years. That is impressive too!

Howard is a homebody. I would say that he is the biggest homebody I know except my brother George's wife, my sister-in-law Natalie, she is also a huge homebody. George and I, when we walk in the park, we can occupy ourselves for hours arguing over whose spouse is the bigger homebody. It is a tough contest!

So whenever we drive anywhere it is exotic and I have to take pictures. Here is a picture of a new-build in God's country that I took from the moving car. It was just dumb luck but it is a good shot. 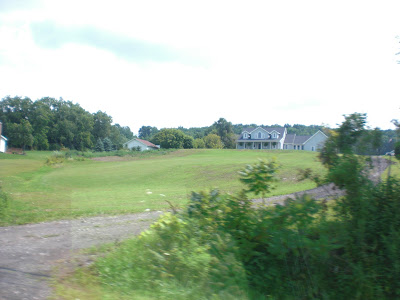 I have to admit this however: In the homebody department I am no one to talk. I have been known to sit in my house for entire summer weekends, happily researching the life of Leonard Pennario. My friends despair.

When I went to spend those months with Pennario in California, no one could believe it. My one sister called my other sister and asked, "What got into her?"

But you do what you have to do!

Speaking of which, what I have to do now is cook zucchini in ever more creative ways. Howard and I left Lou Michel's party with two gigantic zucchini. That is the risk you take when you travel to God's country which is one reason we do not do it more often.

Lou has a vast garden and he gave us all plastic bags and we went back to help him harvest zucchini and cucumbers. Of course you can guess what happened. Lou did all the work and the rest of us stood by with our beers and watched because we did not want to ruin our shoes.

Everyone says you cannot eat this gigantic zucchini but that is a lie. We took one and diced it up and sauteed it with peppers and onions and cumin. That was yummy! You could have tossed in corn too but I am on the South Beach Diet.

The rest of the big zucchini, I do believe I will dice it up and make zucchini oatmeal cake. I found a recipe I like and it uses a whopping two cups of shredded zuke! Though with what we are dealing with here that is only a drop in the bucket.

This is life living off the fat of the land!

Tomorrow, remind me to talk about crabapples.
Posted by Mary Kunz Goldman on August 05, 2009

One of my favorite recipes is mock apple pie made with yellow squash. I suppose you could use zucchini, but I haven't tried that.

You remove the seeds from the squash, and slice it into pieces that resemble slices of apple. I guess you'd use about 5 cups. Then you bring it to a boil with 3/4 c water, 3/4 c sugar, cinnamon and lemon juice, and simmer until soft (but not too soft).

Once that's done, put it into your favorite pie crust. If you're lazy like me, it won't be homemade. You can top it with regular crust, crumb topping, or just leave it open on top. Then bake it for about 25 minutes at 325.

Nobody will ever guess what it is. You could try to fool Howard, but I'm sure he'll have read this already.

Ryan!! I have never heard of that! It must be tried!

'Adventures in recipes', lol. It will be a long time before I forget the famous sourdough bread though. Heck, I even dreamed about that one! That was where it became 'The Blob'! :)