What happens in West Seneca...

Today I had to go back to West Seneca to get my stitches taken out. These are the stitches that are in my mouth. Unfortunately to Howard's way of thinking they did not stitch up my mouth so I could not talk. They stitched up my mouth after I got that piece of someone else's bone. Remember?
Taking out the stitches took about 30 seconds. I could not believe it! "That's it?" I said. The doctor was laughing at me. I took that picture of him you see up above and then I left the office, relieved beyond measure. After that I was driving back along Union Road and being me I missed the exit I was supposed to take to get on the 90. So there I am driving along and I get to a church. You would not believe what church this is I have found. It is Fourteen Holy Helpers! We were just talking about that church! I was awestruck. I stopped the car. I expected Fourteen Holy Helpers to be beautiful and unusual but I had not expected this. 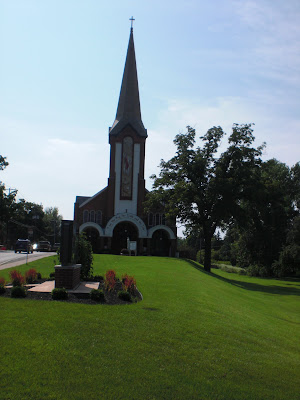 They have this sweet statue of St. Christopher with the infant Jesus on his shoulder. St. Christopher, remember, was what got us onto all this. He is one of the Fourteen Holy Helpers. 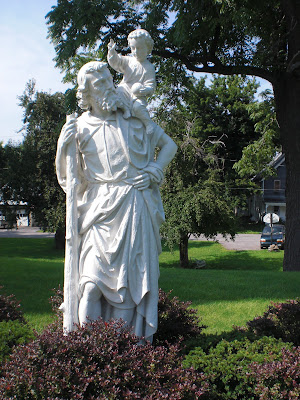 In this shot you can read the inscription on the church. As we learned a few days ago it is the only Fourteen Holy Helpers Church in America. There is no other. 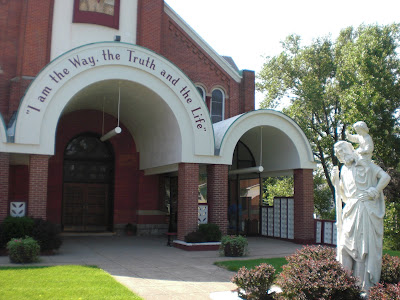 Now here is what is neat. I have learned that Fourteen Holy Helpers used to be the meeting house for the Amish who originally settled the Hamlet of Ebenezer which is where it is located. The Amish were German Protestants and they moved to Pennsylvania in the mid-1800s and when they did, the German Catholics who were moving in took their meeting house to be their church which they named for the Fourteen Holy Helpers. Zounds, what an awkward sentence. It is the sentence of the Fourteen Holy Adjectives! But you know what I mean.
I think the Amish must have felt good knowing that their meeting house was going to be put to such a reverent use. And it is a nice courtesy to the German Protestants that the German Catholics made the meeting house into their church. You do not often see that. It is usually the other way around, the Catholic church becoming someone else's church. Here is the plaque that shows I am not making all this up. 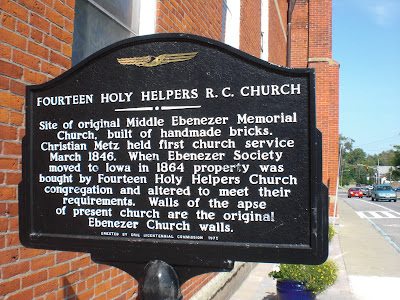 Here is a shrine which, when I go to Mass at Fourteen Holy Helpers, here is where I am going to light my candle for Leonard Pennario. 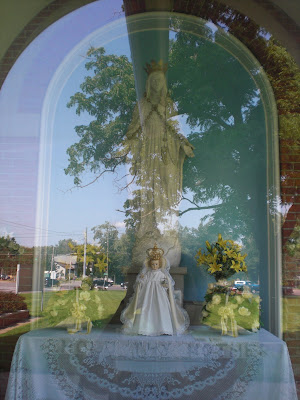 The darling Fourteen Holy Helpers School bears the date 1908 and it is still open. So this was the school we always used to giggle about! It was funny to see it in person. 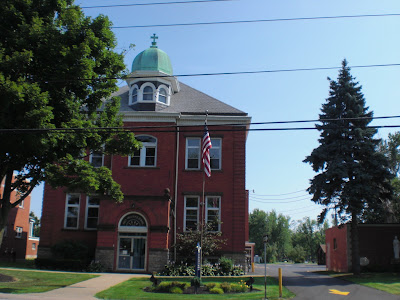 In this picture if you look closely you will see a gentleman sitting on a bench who looks as if he is there in need of some Fourteen Holy Help. 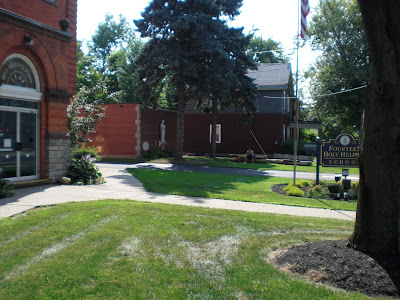 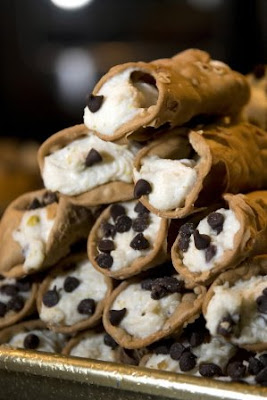 I will not be eating them anytime soon, what with all my various tooth problems! Everything seems OK with my mouth now but I am told I am not to use the Water-Pik at any setting other than the lowest. That is a blow! I loved the Water-Pik at the highest setting it would go. Rumbling and splashing. Alas, no more. "That will mess you up," is what the doctor told me.
And there is no 14 Holy Helper in charge of teeth.
Posted by Mary Kunz Goldman on August 04, 2009

Did anyone besides me bother to count up the Holy Cannoli? There are 14!