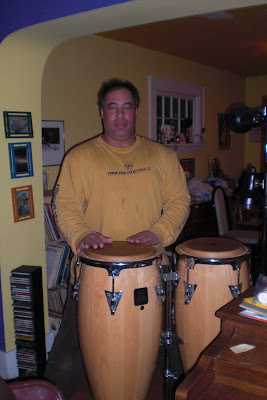 Here is a funny story from the other night when I was over at my friend Gary's with lounge sensation Guy Boleri and our friend Lou. Lou, pictured above, was there with his dog, Uncle Lou. We were all sitting around listening to records. We listened to Joni Mitchell and Bessie Smith and Leonard Pennario and Jim Croce. Ha, ha! Guess which record was my request!

Gary just got his turntable fixed and you know what that is like, it is like oxygen. There is nothing like getting your turntable fixed, or replacing it, as the case may be. So Gary was just pulling out record after record. And we would sit there the way people used to in the great days of the 1970s and 1980s, passing the record jackets around, holding the jackets in our laps, meditating on them.

CDs, I am sorry, are not nearly as much fun.

And those flimsy little booklets! You can make the pictures and notes as lavish as you want, fine, you are still stuck with that tiny booklet that gets separated from the CD and gets lost.

And do not get me started on those jewel cases.

What about Richard Jewell?

I had the funniest conversation with our friend Lou. Well, I had two funny conversations with him. The first was about my once and future piano teacher, Stephen Manes. Lou does construction and it turns out that he did work for Stephen both when Stephen lived on High Park in Snyder and when he lived on Voorhees Avenue in Buffalo.

He was not sure if Stephen would remember him but he knew everything about him. And we made plans to go together to Stephen's concert when he is in Buffalo in August.

A most Buffalo conversation!

The other thing that was funny was I forget how we got onto this, but I mentioned that I go to the Latin Mass.

And Lou is Latino. And he nodded understandingly.

"I like Latin music," he said. And he started talking about Arturo Sandoval!

Ha, ha! You have to love a communications gap like that. God knows what Lou was imagining, a Mass with salsa music, I don't know. Well, wait, I have been to Masses like that in my life, now that I think about it. Maybe he has, too.

Anyway, nice night, the four of us lying around, listening to records. Oh, and this is another thing. I have gone super low-tech recently. I am listening to cassettes!

On Saturday I went to Goodwill with my mom and there were a pile of cassettes there and right away something looked funny. I saw the situation: Some piano nut had unloaded his collection. Maybe someone had upgraded to CD, maybe he had died, who knows.

Well, whatever. The long and short of it was, I got Earl Wild, "Wild About Liszt." And Rudolf Firkusny playing I forget what. And the Chopin waltzes by the holy, the anointed Dinu Lipatti. I have to rag on the Romanian pianist Dinu Lipatti a little because, well, long story.

What else? Gyorgy Sandor, Byron Janis, Paderewski playing Chopin. And "Bobby Short Live at the Carlyle." And my friend LarryC will be happy to hear this: I also found an RCA cassette of Pennario playing Liszt! The piano concertos 1 and 2, with the great conductor Rene Leibowitz and the London Symphony. Remember, Larry and I know each other because of this magnificent album. He is the Leibowitz fan and I am the Pennario fan and this was where our paths crossed.

I did not like finding Pennario at the Goodwill because that has never happened before. But at least Saturday he was in very good company.

Since then I have discovered that my car has a tape player. Who knew?

So I have great music to brighten my Monday.

Happy Birthday, MKG!
...from your editor and bloviator.
Posted by Mary Kunz Goldman on June 01, 2009

That was a cool find, Mary! The Liszt recordings that were uploaded to YT were done back in the early days of my YT experience, and I made quite a mess of them. If you like, I would be happy to burn a CD of them for you. Just let me know.

The team of Rene Leibowitz and Leonard Pennario is a very exciting thing to ponder. Yes, I have a 'special' appreciation for the work of Leibowitz and through him, have become quite the Pennario fan now. What a team!

BTW, is it your birthday, Mary? If so, HAPPY BIRTHDAY!