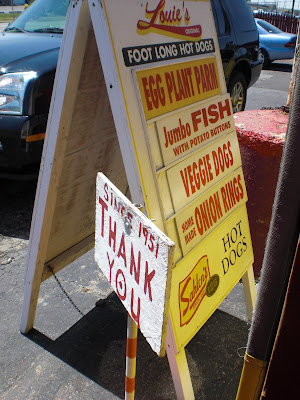 It is funny to have it summer so suddenly. We can wear white now! I wonder when the White Party is. That is that party that a group of gay guys in Buffalo used to have where everyone shows up wearing white.

I did not get to wear white today. I was thinking about wearing a white dress I bought at a garage sale yesterday. It was billed as a nightgown but I decided I could use it as a dress. But all my plans came to naught because today Howard and I went the one place where you cannot go wearing something white.

I cannot wear white to Louie's Hot Dogs because I would end up wearing all this ketchup and mustard.

But I had a good time all the same. We drove to Louie's on Sheridan Park in Howard's '70 Javelin. Not to be confused with his '71 Javelin or his '72 Javelin! He has three of them!

On our way we passed this truck. 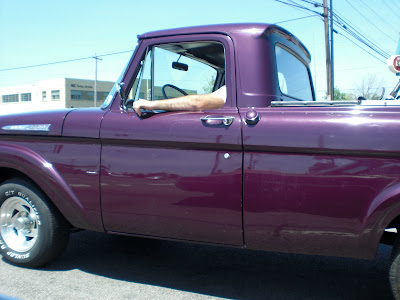 Isn't that beautiful? We love the cool purple color. I love how all you see is that hairy arm stretched out the window. That is funny too.

Here we are approaching Sheridan Park. That is Louie's visible to the left of the Town of Tonawanda water tower. It is red and yellow. Click on the picture and you will be able to see it in more detail. 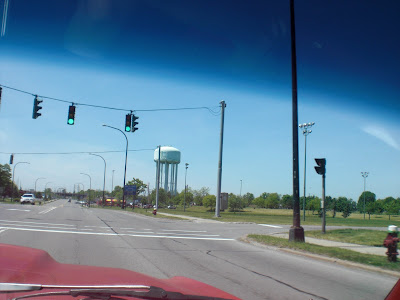 Does it get better than this? Memorial Day, beautiful weather, two cars on the road and that is all. As Howard says now is when Buffalo has it all over other cities. Everyone else has insects and traffic and sweltering heat. But not us!

Here is a view of Sheridan Park itself which I took from the passenger window. 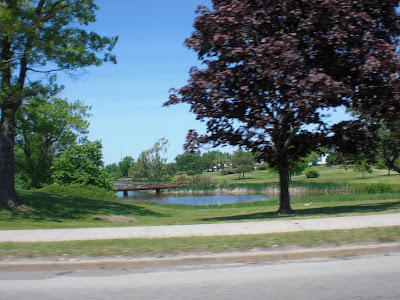 Other cities do not have places either like Louie's. Louie's son was even manning the checkout! In Buffalo, hot dogs are serious business. Louie's goes back to 1951 which means it was built when Leonard Pennario was 26. I did the math while we were in line. Here is Howard waiting to order. 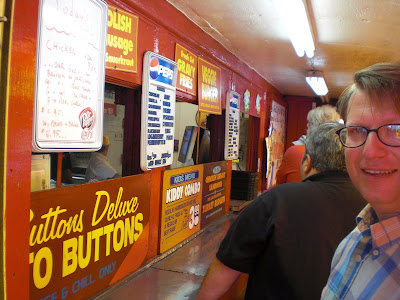 I cannot bite hot dogs because of my braces and my top teeth touching my bottom teeth for the first time in my life. So I was going to get the Eggplant Bomber. But zut alors, they had no eggplant! So I got the Turkey Burger cooked over charcoal.

Alas! I could not bite the Turkey Burger either as it turned out. But I got a plastic knife and did my best.

Here is Howard eating. Observe the Javelin in the background. It is red with patches of brown. 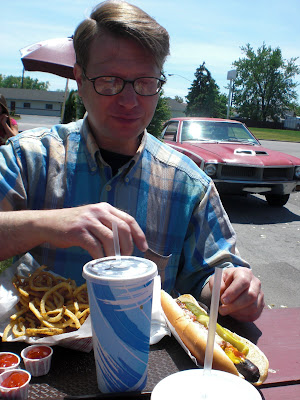 Howard loves those foot-long hot dogs at Louie's. Note to out-of-towners: In Buffalo normal hot dogs are not big enough for us. We need them a foot long. Louie invented the foot-long hot dog. He had special rolls made and everything. I wrote a story about Louie's once for The Buffalo News and they have it framed there. But they cut out my name so you do not know who wrote it. Zut alors!! Zut, zut, zut alors!

But there is an even better story about Louie's that I wrote a couple of years ago in the Buzz Column of The Buffalo News. This story concerned Howard and Louie's. A seagull swooped down and grabbed Howard's foot-long. The whole thing, out of the bun! And the bird flew with it into the air.

And Howard raised his arms and began yelling at the bird. And the bird was so startled it dropped the dog.

And Howard ate it!

I wrote that up and my editor, Liz, she started screaming with laughter and said: "That is the funniest thing I have ever read in my life!!"

It is the truth!

Today nothing so dramatic happened, other than I swooped in like a big bird and ate half of Howard's curly-Q fries. Next time we are going to try the Fries With Gravy. Has anyone had those?

We had to leave before too long because I had big plans to work on the Pennario book and Howard had car repairs to make.

But we will be back to Louie's soon.

When you finish with the Pennario book, you might want to biographize Howard just to use the line "A seagull swooped down and grabbed Howard's foot-long" as a chapter title and/or dust jacket teaser.

That is an amazing story! Sounds like you guys had a great holiday up there.

Prof. S, that quote is definitely going on the jacket. It has that poetic ring to it! LarryC, yes, we always enjoy our holidays on Sheridan Drive!