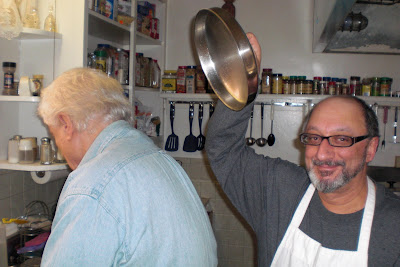 Lounge sensation Guy Boleri joined my friend Gary and me yesterday for the monthly ham-handed attempt at charity. We cook at Little Portion Friary. The reason I do it is No. 1, it makes me a better cook and No. 2 I hope that God will recognize my charity efforts, no matter how ham-handed, and bless my book on Leonard Pennario.

If you ever think about writing a book on someone, beware, because it gets like this. With me these days it is if Pennario is this pot of gold at the end of the rainbow. All roads lead to this book! Unfortunately, the heavenly rewards I hope to reap from the soup kitchen are probably negated because here I am, talking about it in public. I have heard that charity does not count if you let other people know you do it. But I must talk about it! It is too funny not to.

Yesterday we made cassoulet for a crowd under Gary's capable leadership. He has worked for restaurants so when he joins us at the kitchen, the rest of us can take it easy. It is not like this one time I cooked with Peggy Farrell and both of us lost five pounds out of stress! With Gary you lose no weight. That is the bad news.

Here is a candid shot I took of Gary at work. 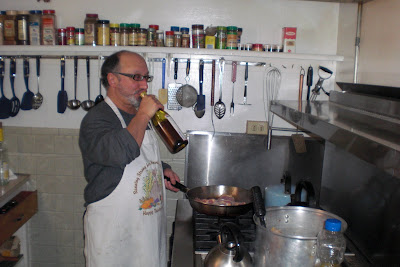 Ha, ha! He brought along cooking wine to go into the cassoulet. It was Chardonnay he had made himself that he had considered substandard but yesterday as we cooked we decided it was not that substandard. Here is a shot of Guy with the cooking wine. 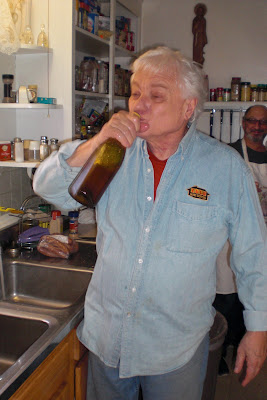 Gary grabbed the camera and got a shot of me with the bottle too but I did not think it made me look attractive so I am not running it. That is the advantage of being the one who writes the blog! I never run pictures of myself these days because every picture that is taken of me looks like hell. I mean heck. I do not swear on this blog.

In sharp contrast Guy never takes a bad picture. Here is a beautiful portrait of him mashing cannellini beans. You mash the beans and it thickens the stew. Gary taught us that yesterday. 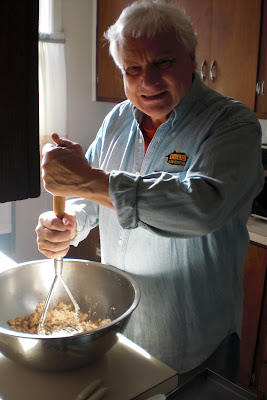 While the stew was simmering we relaxed in the living room. 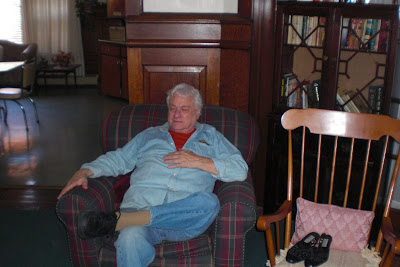 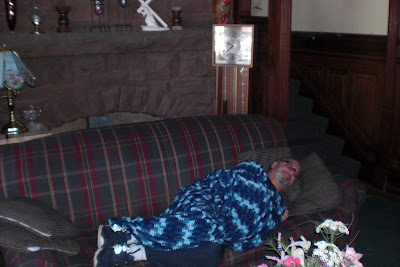 Observe the massive fireplace behind the couch. Little Portion is in an old convent and the woodwork and architecture are amazing. There are pocket doors and tin ceilings and hardwood floors, all of them in beautiful condition. Note to out-of-towners: In Buffalo, even homeless people live in gorgeous and architecturally significant buildings. You have no choice!

We wound up at the Anchor Bar listening to Weird Al Yankovic and feeling good about ourselves for our charity efforts.

There was this figure at the Anchor Bar we did not think we had seen before. We are not sure we like it. 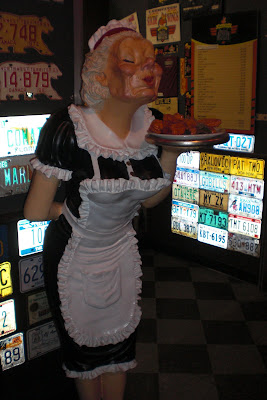 There was a TV over the bar we kept an eye on although it was set on mute. Bruce Springsteen is beginning to look weird although these days I am no one to talk, seeing that I cannot find a picture of myself I can run on my blog. Barack Obama was running his mouth to someone but you could not hear him because, as I said, the TV was set on mute.

Remember my dream about Barack Obama? I am still thinking about that. Last night I was back to dreaming about Pennario but that was funny, the one night when he was pre-empted by Obama.

Pennario would not have liked that. That is for sure.
Posted by Mary Kunz Goldman on February 02, 2009

What't Tom Golisano doing in a Valu denim shirt on your blog?