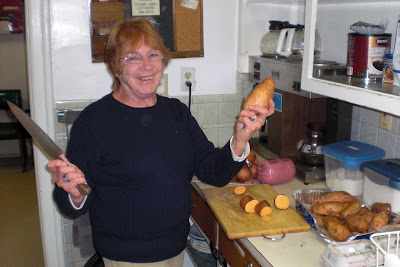 I would have weighed in earlier except today I was cooking at this soup kitchen which I do once a month. It is OK that I admit this because I want people out there in Blog-O-Land to know that Republican conservatives cook at soup kitchens, too. Liberals always think they are the only ones who volunteer at soup kitchens. They think they have a lock on it. They do not! At Little Portion Friary, they let Republicans in, into the kitchen at least. So that is where I was today.

My friend Peggy Farrell, the jazz singer, indulged in this act of charity with me. That is Peggy in the picture above. We were cooking up use-'em-or-lose-'em sweet potatoes we found in the basement that were not going anywhere. I took that picture early on in our cooking session, when things were going well. You know how in Laurel and Hardy movies, they always play "Stars Fell on Alabama" when things are going well? You could play "Stars Fell on Alabama" as you watched us cutting up these sweet potatoes.

Meanwhile I arranged the pots on the stove. 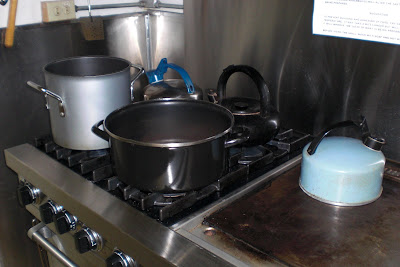 The stove at Little Portion is a professional-grade Viking stove. I love cooking on it the way a pianist loves playing a nine-foot Steinway grand, or a pilot loves flying a Lear jet. Ordinarily in my squalid life I would never get the chance to cook on a professional-grade Viking stove. It is a pleasure just turning on the burners. There are two ovens and each one is big enough to put four pies in at once.

We know that because we made sweet potato pies with those dent-and-scratch sweet potatoes. That, and Brunswick stew. Because No. 1 there was chicken that needed using up and No. 2 there were these beautiful little 3-lb frozen hams. I took a ham home and thawed it out and today we cut it up and cooked it with the chicken, also tomato puree, green peppers I got at the Hertel Market, onions, canned corn and -- my secret ingredient -- barbecue sauce. Barbecue sauce is the key to greatness in this dish. Just pour that barbecue sauce in!

Then we made cornbread. You can never make enough cornbread. It goes LIKE THAT.

Here is the spice rack at Little Portion. Overhead is a wooden statue on the wall of St. Francis of Assisi. I decapitated him in the picture. That is a bad sign! 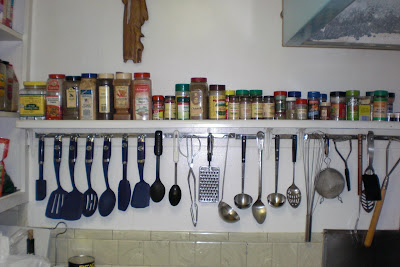 We hit our nadir when we realized we had forgotten to put the sugar in the sweet potato pies and they had already been poured in the crust.

What about Ralph Nader?

Here is Peggy trying to pour the sweet potato pie out of the crust and back into the mixing bowl so we could add the sugar. 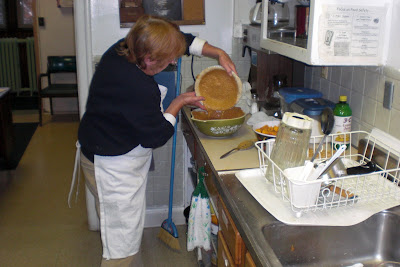 Ha, ha! I was afraid she would kill me as I took pictures but she was cool with it. We figured we were fixing the problem, everything was OK.

But then the crust came out with the pie filling! 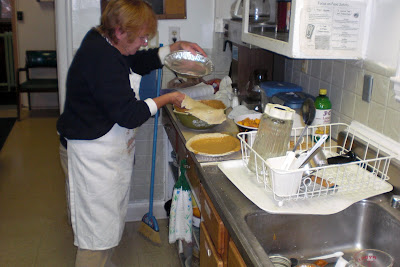 When we ran out of epithets we went downstairs for some pie crust mix. We had made the first pie crusts from scratch. Well, Peggy had. I was dicing and eating the ham.

Voila the stew in progress. Observe the cubed ham. I have made Brunswick stew before but never with the ham. So this was a milestone for me. 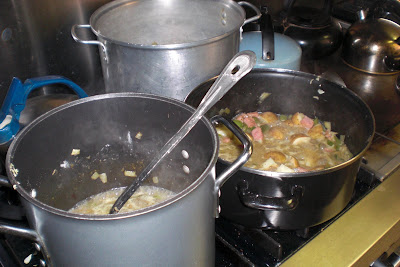 We finally finished the meal at about 4:45 p.m., a whole half hour ahead of schedule. "A whole half." Howard always laughs when I say that. Around 4:30 p.m. the cooking gets to be fun because people are arriving and they always remark on the wonderful aroma.

Now I am high on my heroic deeds and I have decided 2009 is going to be my year. This is the year when I will achieve my potential, soar like an eagle and become the person I am supposed to be. The secret of success is clear.

It is just as they say in "The Joy of Cooking."

I didn't know "Stars Fell On Alabama", so never connected it with Laurel & Hardy until I read this entry. More arcana: If anyone reading this has seen the L & H "The Music Box", they will see a QRS roll in the player piano. The piano roll arrangements heard in this film are all by J. Lawrence Cook, the fabulously talented QRS house arranger for a long time...his stuff was very sophisticated both harmonically and rhythmically.