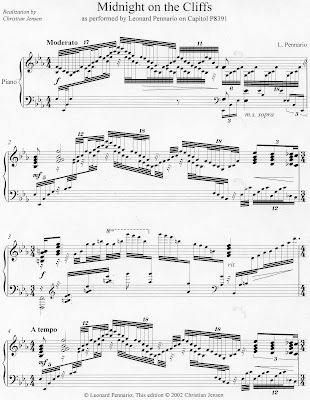 And I cannot even keep my credit cards straight!

This unusual man I talked to, his name is Christian Jensen and he lives in Minnesota. Where else would someone like that live? Minnesota is like Buffalo. You have long winters in which to devote yourself to arcane projects. I choose to probe the life of Leonard Pennario. Mr. Jensen transcribes pieces by piano titans including Art Tatum, Vladimir Horowitz and, of course, Pennario, which is why I wound up on the phone with him. Lounge sensation Guy Boleri utilizes the long winter to build paper castles. Sometime we have to run a picture of one of Guy's castles! That is a whole other story.

I am sure it took Mr. Jensen a whole winter to transcribe Pennario's "Midnight on the Cliffs," which is what he miraculously did. It is next to impossible to transcribe! Pennario himself could not write it down. He could not believe that Mr. Jensen was even attempting it.

I cannot find Pennario's solo-piano "Midnight" on YouTube but here is the orchestral version. It is not anywhere near as intricate as the solo piano version. Keep that in mind!

It says how smart Mr. Jensen is that he pulled off the transcription. "Midnight on the Cliffs" was kind of like his Mount Everest but he tackled it and triumphed. That is the first page of it up above. Read it and weep! There are 17 pages total. 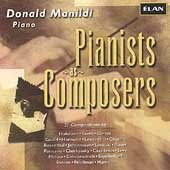 Mr. Jensen did such a good job that Donald Manildi, the head of the International Piano Archives, played his transcription on a mind-blowing CD called "Pianists as Composers." That is Donald Manildi's CD pictured at left. He includes Pennario, Horowitz, Gould, Rosenthal, Cortot, Cherkassky, etc. Just looking at the cover can make you dizzy.

Donald Manildi was the one who got me in touch with Mr. Jensen for which I definitely owe him a beer. Note to out-of-towners: This is how we settle our debts in Buffalo. We buy people beers. They are currency here!

Back to Mr. Jensen, the miracle worker. I took the liberty of calling him "Chris" because that is how he graciously signed his emails. And here is what I loved about our conversation. Early on, when I emailed him trying to arrange a time to talk to him, he told me he was not a phone person. Piously, I told him truthfully that I am not a phone person either.

So he agreed to talk to me on Thursday, 8 p.m. my time. With which, after I had been out to dinner and had two glasses of wine, I sat down and called.

I am not kidding, it was almost 10 p.m. when I finally let this guy go!

My little secret, what I had not let on to beforehand, is that normally I am not a phone person. When I am talking about Leonard Pennario I am so a phone person!

I can not even begin to imagine how difficult that must be. It is truly mind boggling!!!! I have to agree with you about the beer as currency. Just something most out of towner's would never understand I guess.

I have Mr. Jensen's transcription of this piece and have attempted playing the first few bars: very scary pianism to say the least. I was wondering if Ms. Goldman has Jensen's email for me? I want to ask him if he has transcribed any other pieces by Maestro Pennario like Midnight Cowboy, Invitation, etc....from his "Film Theme and Variations" album.

Mr. Jensen was kind enough to send me a copy of "Midnight" transcription. Very generous! Thanks to him!

I have to Thank him for all the great work he has done, we have to thank and support artist like him. Mr Jensen I Thank You Again I hope one day you pub. some of your hard work and your story.

Exdoll, thanks!! I am working hard every day on the book and I have hopes it will come out soon. Thanks so much for commenting!