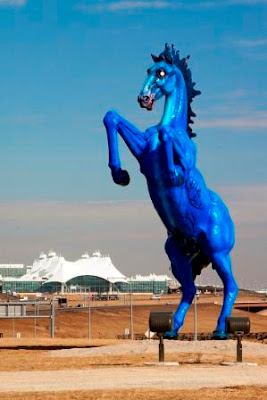 Those poor people in Denver, Colo.! You have to laugh reading the story in today's Wall Street Journal about a public sculpture called Blue Mustang that they are now stuck with.

Blue Mustang is this towering figure of an in-your-face anatomically correct horse -- bright blue, with eyes that are red light-emitting diodes. It is at the Denver airport. If you fly to Denver Blue Mustang is the first thing you will see. Above is a picture of Blue Mustang that I found on a Denver Web site. The Wall Street Journal only lets you see half of it and I wanted to get a look at the whole thing.

People in Denver are protesting the sculpture. They are writing haiku in protest. That is funny, how Denver-ites protest things. Here in Buffalo we handle controversial situations by scrawling big notices and putting them up for all the world to see. "Shame on Lou Ciminelli For Ruining Our Community." "Turn Off Channel 7 News." Etc. But in Denver they write haiku.

What a difference between our two cities! In Buffalo we can boast, and we do, about Leonard Pennario, who could chew up Chopin's Heroic Polonaise and swallow it whole.

What can Denver claim, John Denver? When I was at Sacred Heart all the nuns loved him and we would listen to him in the Pillow Room.

Back to the desperate Denver haiku. One goes:

But lots o'luck getting this thing, this sculpture, down. As the Journal explains, "Uprooting public art turns to be quite tricky." For one thing the artist who made the horse, Luis Jimenez, died when the horse's torso fell on him. His widow and other fans of his are passionate about the sculpture because of that. There is also apparently a rule that says that public art has to be in place for five years.

Five years! What kind of rule is that?

Denver could learn from Buffalo's case involving our old mayor Jimmy Griffin and Green Lightning, the sculpture by Billie Lawless that was foisted on us some years ago. Remember Green Lightning? As in the case of Blue Mustang you had that phallic thing going on.

Here is a picture of Green Lightning when it was in Buffalo. You cannot really see the phallic business here. Here it just looks like a pile of flotsam and jetsam that someone, perhaps Ron Moss, carted in and left there. 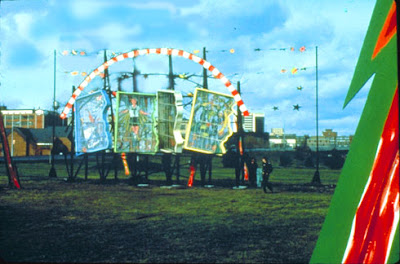 But here it is lit up and now you can see what I'm talking about. 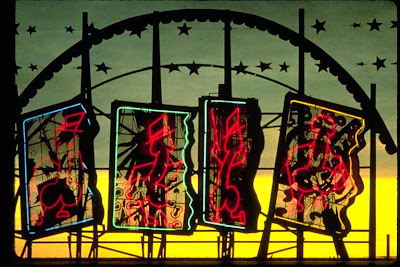 In the remote chance you think I am imagining things, I purloined that picture off an official-looking Web site devoted to the history of the sculpture, and the when I did so, I discovered picture was identified as "Green (you know whats). I do not like to put the vulgar word but here is a hint: We talked about that word the other day.

Now, I respect Denver's Blue Mustang more than I respect Green Lightning. Jimenez made a very good sculpture of a horse and it takes talent to do that. But I can see the point of the folks in Denver who do not want it at the airport.

Memo to them: You must do with Blue Mustang what Buffalo did with Green Lightning in the mid-'80s.

I do not remember exactly how we wound up with Green Lightning. I guess someone commissioned it, probably with public money. But as soon as it went up and someone plugged it in and we saw what it looked like, people began protesting Green Lightning because it made us look like idiots. Naturally they found themselves up against the usual arguments. It could not be removed, free speech, free expression, laws said it had to stay in place, blah blah blah.

So over Thanksgiving weekend when no one was looking Mayor Griffin simply ordered a crew in there to take it down. Overnight, the thing was gone, problem solved. Sure, there were protests, but the deed was done, and now Green Lightning is just a distant, amusing memory.

Denver, take your cue from Buffalo: That is how you have to handle these things.

Not by writing haiku.
Posted by Mary Kunz Goldman on February 07, 2009

The minute I started reading this post I immediately thought of Green Lightning, and what a mess that was. You are absolutely correct that those people have to take the lead from Good Old Jimmy, he knew exactly what to do!!! Reading about Green Lightning brought me a pretty good laugh.

i was in denver all the time for work in early '08 and the horse was up then. i noticed it every time but never knew it had big junk hanging there for everyone to see!

We have nicknamed it 'Old Meth'.
The big issue is the amount spent of public money without public approval of design. Another example of government gone wild.

No it wasn't commissioned with public money. Hopefully you will do better with your fact checking on your current book. Though when people shoot from the hip they generally do it consistently.
Green Lighting stood for nine (9) years in Chicago in the South Loop near River City without any controversy what-so-ever (other than what the City of Buffalo attempted unsuccesfully to export to Mayor Washington).
What exactly is Buffalo to Chicago? A back water....at best
What Buffalo has going for it is the infamous slaying of Dr. Slepian while he stood talking in his kitchen to his wife and son...now that's what I call the City of Good Neighbors!

About Chicago, they never produced a pianist like Leonard Pennario but they sure liked him. Pennario played some wonderful concerts with the Chicago Symphony and they had this nasty critic there named Claudia Cassidy who likened him to Horowitz.