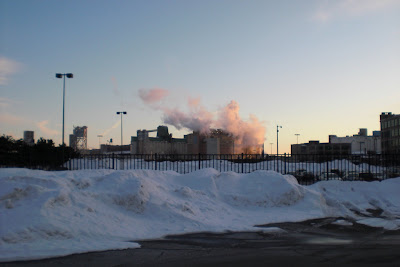 I like the cold. I enjoy it. One thing I like about when it gets close to zero degrees is you get to see smoke pouring from chimneys and steam rising from the grates in the sidewalks.

As a matter of fact the winter is passing too fast for me! I wish I could hang on to it.

Above is the view from the office parking lot. Note to out-of-towners: This is the kind of scene that we in Buffalo see every day just going about our business! That is the General Mills plant. It is only cranking out Cheerios but you would think looking at it that it was working on the hydrogen bomb.

I snapped this picture of the buildings next to the General Mills plant. I like buildings like this because they are so old and you can see them in vintage photos of Buffalo. On a cold day the city looks a lot like it did decades ago. 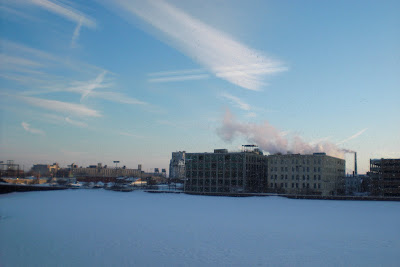 Surely these buildings were here when Leonard Pennario was a boy in Buffalo. Surely they were already old then!

Here is one more picture that I took from the second floor of the office. I took this picture because I like the thingy on the roof outside. 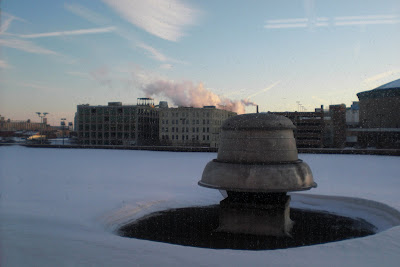 Isn't this fun, posting pictures of our everyday lives? This is what I saw when I looked out the window at work, this is what the sky looked like when I got up this morning, this is what I saw on my way to church. I see that sort of stuff all the time on the Internet. And I love it! It is like some quaint 18th century fad. I think historians will see it as such.

I have been feeling nostalgic because it is almost exactly a year ago that I came home from my long stay in California with Pennario. I went back and forth a bunch of times after that but after being there -- what, 100 days? something like that -- I flew home a year ago yesterday, on Feb. 5. I was supposed to have been back earlier because the office wanted me back but Pennario and I stretched it about a week because we wanted to go to the San Diego Opera to see "Tannhauser." Which we did. We pulled that off.

Here is a picture of the production of "Tannhauser" that we saw. It was beautiful. I will always remember sitting next to Pennario watching it. 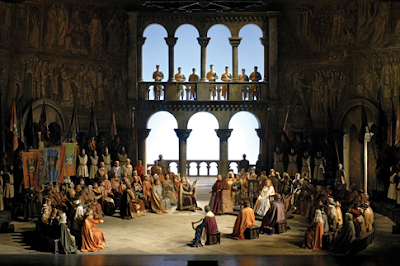 Here is a glimpse of a scene from "Tannhauser" that I love. This is when the heroine, Elisabeth, greets the castle she loves and is finally back home in again. I was trying to find a clip with an English translation but I couldn't. Well, you can tell what she is singing about. She is greeting the castle and saying how much she loves it. The ending is great where it goes over the top.

Now, me being back home in Buffalo a year ago, that was a whole other story. Howard does not let me burn candles for one thing. He is afraid I will burn down the house.

Also I am sure Elisabeth in "Tannhauser" did not have to catch up on all the things I had to catch up on. There were bills I hadn't paid, things that needed fixing because I had left in such a hurry and while I was gone Howard spent all his time at Big Blue.

It is hard to believe that was a whole year ago.

I am still not caught up!
Posted by Mary Kunz Goldman on February 06, 2009

Stop the presses! You can't burn candles, but Howard can ignite cigars? In the same house?

You said a mouthful Art! I am having a good laugh over that one!