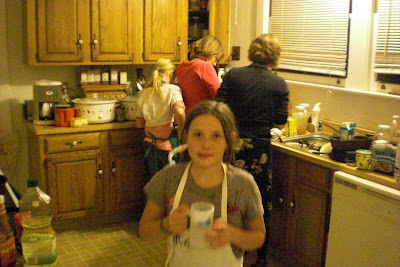 Yesterday, from National Fuel Gas, the dreaded words: "Your statement is ready." Zut alors! I held my breath.

It should have read "Your astronomical, unethical, unholy statement is ready."

Criminy! These are the wages of lying in a hot bath whenever I have felt like it which has been often these days.

"Criminy" is an oath I do not think I have used before. I just looked it up to make sure I had it right. It is supposed to be a "euphemism" of "Jesu Domine," or Jesus Lord. It dates from 1681. It is a good ol' oath which I will be using more often, especially if I keep getting more statements from National Fuel Gas like this one.

Luckily I have been saving money in other ways. I have been meaning to share my kitchen money-saving tips because I feel the world is waiting for them. That is me in my kitchen up above, wearing black in mourning because I just got my National Fuel Gas bill. My niece Millie is the one brazenly confronting the camera. That was from when we did our Christmas baking.

So. Ahem. Here is my guide on how to scrimp in the kitchen.

1.) You know how cone-shaped coffee filters cost about 10 times more than the basket filters? I griped about that the other day. Since then I ran out of cone filters and switched to basket filters and it has worked out just fine.

2.) Italian sausage is 99 cents a pound at Lupus Meats at the Broadway Market. You cannot beat that price. It is greasy but it is good and you get rid of the grease by taking the sausage out of its casing and browning it and pouring off the fat. Use it in lasagna or spaghetti dishes or, well, what I did yesterday was make a shepherd's pie with it mixed in with mushrooms and eggplant and topped with mashed potato. You could not beat that.

3.) At the new Hertel Food Market on Hertel near Delaware they have olives for $3.87 a pound. I cannot believe I am quoting prices like this off the top of my head. I have turned into some kind of idiot savant. Anyway, this price is about half what they charge at supermarkets. And you can mix and match with a dozen varieties of olives. Last time I was there I had them mix up pitted Kalamata olives with these huge green Sicilian olives which I ate in honor of Leonard Pennario.

4.) The Hertel market also has a giant supply of 1-lb cartons of Friendship cottage cheese for $1. I bought a bundle of them. It has been a long time since I had a corner store where they carried fell-off-a-truck specials like this. The last place I remember that did that was the Potomac Superette back when I lived on West Delavan.

5.) Those oxtails from the Broadway Market were darn good. Howard said the stew tasted so rich.

6.) About how you save money baking bread -- this is for you, Pauldub -- instead of buying yeast by the packet, you buy it by the pound. A packet, about a tablespoon, was up to at least 50 cents last time I checked, which was a long time ago. A pound of yeast, about 100 packets' worth, is ... drum roll please ... $2.15, when I bought mine at Lorigo's Meating Place on Grant Street. That was when I was new baking bread and wanted to feel free to make a lot of mistakes. Buy yeast by the pound. Do it.

Wow, look, I found a picture of Lorigo's! 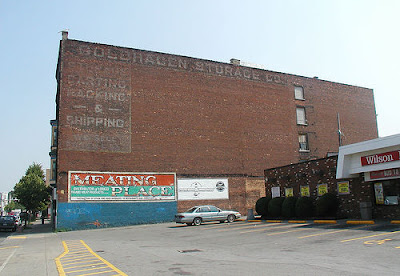 7.) Buy honey in big jars at the Broadway Market. Much, much cheaper than buying it in those tiny plastic bottles shaped like bears. Plus this is a great part of the country for honey, so enjoy. I like the Basswood and the Buckwheat honeys.

8.) Gato Negro and Santa Carolina wines are the best and Premier is always putting them on its bottle-for-a-buck special. They are from Chile and they are good.

9.) Dried beans are more expensive than they used to be but they are still cheaper than canned. I don't know why cookbooks never mention this. Quit buying canned beans. Plus if you use dried you use up less of the world's resources. I know it is shocking that Republicans care about this but we do.

11.) Scorn not the cabbage. At the Hertel market, green cabbage is 28 cents a pound. Make a German sweet-and-sour cabbage pot with those apples and a little of that honey and a splash of vinegar, bought by the gallon, of course. Mmmmm, that's good eatin', as the guy who used to be in charge of the group home next door would say when we traded recipes.

12.) Drink municipal water, not bottled water. You have enough expenses.

So those are my tips. Here is my little wish list. Does anyone out there in Blog-O-Land know where I can get cheap olive oil?

Does anyone know where I can get normal olive oil cheaper than extra-virgin olive oil? I actually prefer the normal stuff but it never seems to be cheaper. That is not fair.

Remember when people chimed in to solve the case of Peter Piccolo and the case of the mysterious yacht? That is what I hope will happen in this case.

When you are at the Market, try Save-A-Lot...

BTW, Here in lovely Glendale, California, my last gas bill was around $12 and electric was around $180 (a space heater and leaving the computer on all the time spins that wheel like the dickens).

Next time, Mary, try closing the windows once October comes.

As far as saving money on food costs, I have an easy solution:

I don't drink coffee. Don't eat Italian sausage. Or olives. Or cottage cheese. Never had an oxtail. Don't use honey. Rarely drink wine. Dried beans and cabbage don't come up much either.

Now if the price of Cherrios and bagels and orange juice went way up, I'd be in big trouble.

Mary, you might be a republican, but I sure do enjoy your blog! ;)