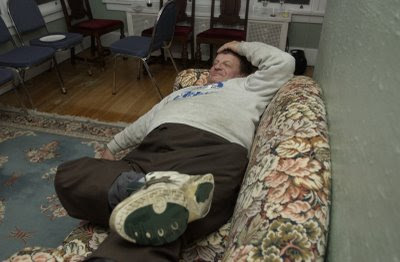 What is with men? They are always napping.

Howard naps all the time and right now my brother George is napping on my living room couch. He has been sleeping for an hour and he is not through yet. He is down for the count. Men always want to nap. I do not understand it.

That is a picture up above of Howard's cousin Ron Moss napping in our front room. It is a famous picture taken by the great photographer Charlie Lewis, who works with me at The Buffalo News. We have displayed it before but you can never look at it too much.

Leonard Pennario was a champion napper. When I was in California with him one of my chief duties was waking him up from his nap. His Parkinson's was getting the better of him by that time, of course, and the medicine he took made him sleepy. But he was a napper his whole life. He had a nap regimen that served him well when he was on the concert circuit. He had to sack out at a certain time and get up at a certain time and he was a little Glenn Gould-like about this nap, from what I understand. If someone or something got between him and it, he would be mad.

I never take naps. Except for in extreme circumstances. I napped once after I had been snowed in at the office all night. Another time I napped because that was my year of insomnia and I had not slept in three days. Also I end up taking a nap if I am ever so unfortunate as to have to fly to Europe. No matter what time you leave the United States you always get to Europe at 6 a.m.! I have never figured out why.

But that is it!

I do not think women get the nap gene as much. We have an hour with nothing to do, immediately we think: OK, what can I do? You can take a walk, read the paper, clean up the dining room, listen to a record. Napping is way down the list.

Compared with these guys, I start feeling like an overactive 2-year-old! Well, I went to my church coffee hour this morning and drank enough coffee to sink a ship. I guess that could have something to do with it.

Speaking of which, I read that that oxtail I put into the pot yesterday is actually not an oxtail but a cow's tail. How about that? A girl I know from Facebook sent me a video of how to make oxtail stew and that is what the chef in the video said.

Tonight is the night I eat it. They tell you to make it the day before so you can put it in the fridge and that makes it easier to skim off the fat. There is an awful lot of fat in this stew! I just took a look at it and I could not believe it.

But here is the good news: Because of vigilance like this I am able at last, as of today, to fit into my old pair of Harley-Davidson jeans. I have not been able to wear these jeans for 10 years! Today when George went down for his nap I went upstairs and tried them on. They did not go on exactly easily and I cannot exactly breathe but so what, here I am, wearing them!

Do not ask how I ended up with a pair of Harley-Davidson jeans.

That is an ugly story for another day.
Posted by Mary Kunz Goldman on January 11, 2009

I nap at a set time every non-work day. Probably caused by the political liberal inside of me.

Your H-D jeans might fit better with a little exercise. Shoveling your walk once a year doesn't count.