Postcards from the Edge (of Town) 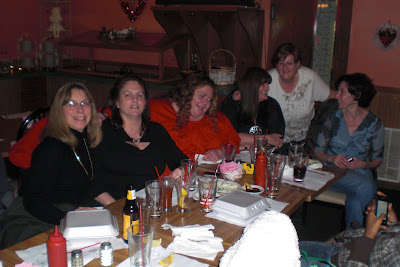 A bunch of us met for a fish fry today at the Edge of Town. Some people we knew, some we did not know, and some we knew only from Facebook. I took that masterful picture above. That is community activist Michele Johnson, third from the left. She got us all together. She is a very sweet person and even encouraged me to talk about Leonard Pennario. She just referred to him by his first name, Leonard. I liked that.

On the left is an attorney with the wonderful name of Diane Y. Wray. She sat across from me at dinner and we got along well in spite of the fact that she favors folk Masses and I love the Tridentine Mass. In Buffalo that counts as a big difference. Diane and her husband, Mike, were married at St. Gerard's, the same church where Howard and I were married. We were all laughing and high-fiving each other about that.

Now this is a true story. A few years ago The Buffalo News did a story where we scoured the city for the most piggy, unhealthy, huge fish fry we could find. Finally we found one that measured up. We sent it to a lab to analyze its fat content, and then published the horrific results.

We did not want to name the restaurant because we thought it would be damning. Were we ever wrong! Because as soon as the story was in print, the phone began ringing off the hook with calls from Buffalonians who wanted to know what restaurant it was that served up this deadly fish fry, so they could go there.

Here we are again seen from another direction. Observe Howard second from the right [...and wearing one of Leonard Pennario's shirts.] -Editor's note. 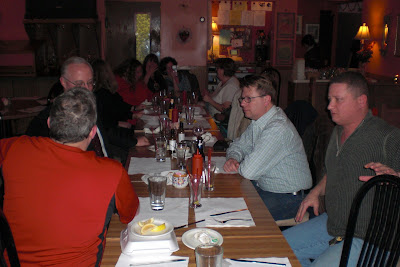 You do not see Howard doing the hula after eating one of the Edge of Town's fish fries, oh no no no.
Posted by Mary Kunz Goldman on January 09, 2009

A great time had by all..We are talking about making it a monthly thing different restaurants each time..will keep you up to date,Great seeing you both,Michele

Mary & Howard, it was great seeing you guys! Sorry we didn't get more of a chance to chat.