The secrets that we keep 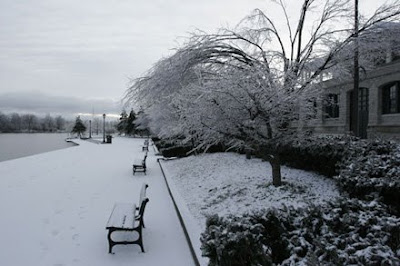 Early this morning I went skiing in Delaware Park and while I was skiing I had a terrible thought.

What if I became a great artist and some day when I was old someone like me, like me now I mean, turned up and began to write my biography? Including calling all the people who had known me throughout my long life?

That would be awful!

Because this morning while I was skiing in Delaware Park, a wintry slice of which is pictured above, I was by myself so I was passing the time thinking about the conversation I had with Leonard Pennario's old girlfriend's sister, the one who is going to Antarctica. She is going to Antarctica on Sunday it turns out.

What with all the excitement over the Wii and Howard doing the hula, I forgot to mention that I did connect with this woman, and what a fascinating conversation we had. There is plenty to think about, that is for sure! I could ski around the Ring Road three times solid and still not even scratch the surface of it.

Apparently this was a very dramatic situation a long time ago with this woman's sister and Pennario. The Antarctica sister, who has the exotic name of Eleana, told me that her sister, Diane, was so beautiful that men just fell in love with her and there was no stopping them. And Pennario was more smitten than most. She said, "He fell for her hook, line and sinker."

It can certainly be applied to what happened a long time ago with Pennario and this Diane, that is for sure. I know that for certain because of a conversation I had with Pennario that touched on it. The conversation makes more sense to me now that I have spoken with Eleana and I have more details.

That is what hit me with that awful thought. What if someone were to be going around decades from now hunting down details about me?

There are some details about me which, you just leave those details alone, you know?

I must say this: Thinking about all this fills me with wonder and gratitude that this great artist I had only just met trusted me to dig into his past -- not only his glories and accomplishments, but his embarrassments and disappointments and all the other not-so-great stuff we all accumulate. Sometimes I still cannot believe he did that.

I just hope that wherever he is now, he is not regretting it.
Posted by Mary Kunz Goldman on January 09, 2009

The sticky wicket is linking life experiences to artistic achievement. My own thought is that Harold Schonberg's book about Horowitz was three times as good as the Glenn Plaskin Horowitz gossip tome, which was three times as long as the Schonberg. How is an artist's life linked to his art...or is it? Is it possible to determine? Stravinsky once stated that he was only the vessel through which Le Sacre Du Printemps passed.

Interesting thoughts! Especially since I too have been busy building biographical sketches on almost 50 individuals (and counting!) many of whom are still alive in preparation for a bicentennial in 2012. That very thought has occurred to me.

More information on this project can be found here: Historical Structures of the Church 1822-present