A call from the Grammy Awards 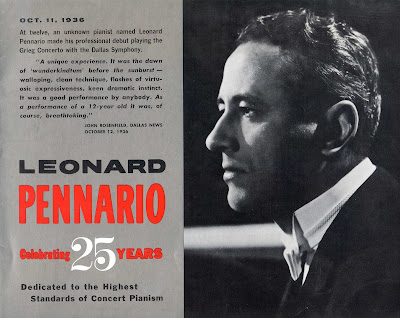 This is how important I am now: Yesterday my cell phone rang and it was the Grammy Awards. They are putting together a tribute to Leonard Pennario for their "in memoriam" segment.

The ceremony is what, next week? I am glad I am not the only one flying by the seat of my pants! All over the world are people operating last minute, just the way I do. That is a comfort and a relief.

Anyway, I am going to buzz them over a few pictures they can show. That way when they get into work today in Los Angeles they will have a few nice pictures of this gorgeous man to look at while they have their lattes. The person who called me from the Grammys was a woman and we laughed together about how good-looking Pennario was.

That picture above is one that I like. There is also this one. 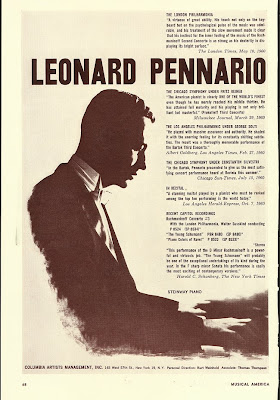 Well, there are a million to consider. They called the right person! That is for sure.

The Grammy people are also trying to find videos of Pennario. Lots o' luck, I say. I did tell them of two that I know exist and they are going to go after them. Undoubtedly they have connections I do not so this could help me get my hands on them too.

There was one video that BBC made in England of Pennario playing Leonard Bernstein's "The Age of Anxiety" with Andre Previn conducting and Bernstein doing commentary. Pennario looks great in it. And his performance is really exciting. I just wish he were playing music I liked more. I do not think "The Age of Anxiety" will stand the test of time. Pennario playing Prokofiev's Third, now that I would like to see.

Then there is also a video that PBS made in which Pennario played the music of Louis Moreau Gottschalk and he portrayed Gottschalk, too. He even grew a beard to do that! I have not seen that yet but I would like to.

And that seems to be about it in the video department. Although as Pennario told me, you never know what those people in those little booths are up to. He said he would not be surprised if there was other stuff kicking around.

Well, there is this video! I wonder if they would want this!

Maybe I should call them and ask.
Posted by Mary Kunz Goldman on January 28, 2009

Mary, If you call Don Boswell at WNED I am sure he will put you in touch with someone to find it for you..Art

I remember the Gottschalk documentary on PBS many years ago -- late 80's? Early 90's? I recorded it, but lost it. I don't know if it was Pennario or not. I think it was called "The Lady Fainted".

I'm a big, big Gottschalk fan. (That's how I found your blog.) If you find a way to that video, please post!

(I linked to you on my blog, btw, if you're wondering where all that traffic came from. Ha! I have no traffic.)