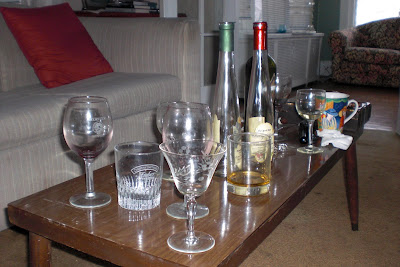 I am afraid my New Year's Eve began early this year. It could not be helped! I was in Dash Market, tired as all get out, after work and my cell phone rings and it's Howard. And he says his friend Walt is visiting from Maryland and Walt and his friend Tom are on their way over.

I said: "But the house!" The house is an awful mess and the dining room table is still buried in Christmas wrapping paper.

I grabbed some cheese and sausages and ran out the door. Cheese and sausages. It is as if I live in France or Germany! When I got home Howard had fixed it so our "party lights" were on. The party lights are these funky red and blue light bulbs that do not give you a good look at the carpets.

Before I even had my coat off our guests arrived. Of course I wound up having this great time only it went until something like two in the morning so at 7 a.m. when I got up I was not so happy. Still, it was worth it. I get such a kick out of Walt. He can make even cancer funny. Walt had thyroid cancer and he beat it and he was telling us the story lastnight of how they thought it was coming back but they were wrong. And even though the story involved him going through all kinds of hardship and needless pain he had us laughing and laughing. That is the way he is.

The worst thing about what Walt went through involved being put on a salt-free diet for months and months. You do not want that! 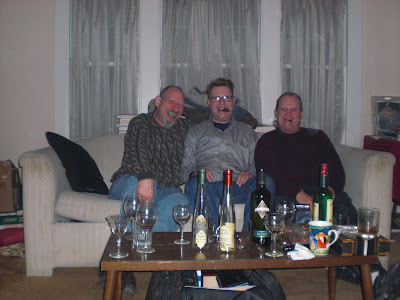 From left: Walt, Howard, Tom, and Ron Moss riding an elephant is visible in the framed picture in the background on the right. (Click photo to enlarge.)
The black bag under the table contains hundreds of fine cigars.

With Leonard Pennario gone, Walt is the coolest person on earth. He sells cigars. That is his business. He never travels with under 800 cigars which is why he ended up here lastnight. We could not meet him anywhere out because you are not allowed to smoke cigars anywhere any more and he and Tom and Howard had their hearts set on smoking some of these cigars. You should smell how my house smells this morning. Well, perhaps it is better that you do not.

Walt also loves wine and wherever he is going he stops at wineries and picks up the local specialties. The night I got married I went upstairs at about 3 a.m. after everyone had left and got into my pajamas and went back downstairs and sat on the couch with Walt and drank wine. On the way to our wedding he had stopped to poke around the Finger Lakes and he had brought a case of this and that. That was fun, that night. That is a fond memory.

Lastnight Walt brought a wonderful red wine from Argentina and also cherry wine and dandelion wine from a winery in Hammondsport. I had never had dandelion wine before! As Walt put it, it is like drinking sunshine. 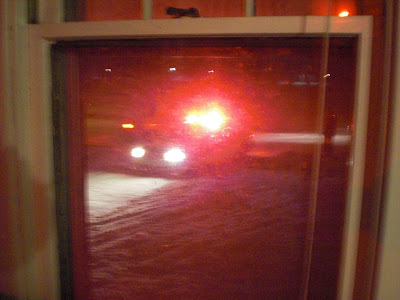 Speaking of sunshine that is a picture above of the coffee table just now in the cruel light of day. It speaks eloquently of what went on. The trouble was, Walt was stuck at our house longer than he wanted to be because there were police cars parked in our driveway and he could not get out. So everyone was forced to keep lighting up more cigars and opening more bottles of wine. There seemed to have been some kind of fender bender out front -- a car parked funny, people standing around. But police are always crawling around our neighborhood so we do not think about it much.

Doris is the glamorous woman whose family owns that winery in Germany where we are going to go visit. That is another trip I am going to take. We are going to stay with her Uncle Otto. He is in his 90s and wears a monocle. Well, she was not specific about the monocle but the way my life has been going I am confident that he wears one.

Doris' family winery is named Behringer. Here is a picture of it, along with her family crest. I am not kidding! You can see it for yourself on their Web site. 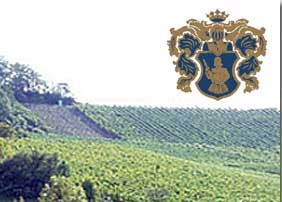 It is amazing what your life turns into if you drop everything to get with a legendary concert pianist.

I can only wonder at what the New Year will bring.
Posted by Mary Kunz Goldman on December 31, 2008

When the time comes I'd love to meet Walt and the gang. You and Howard have a very Happy New Year. Hugs