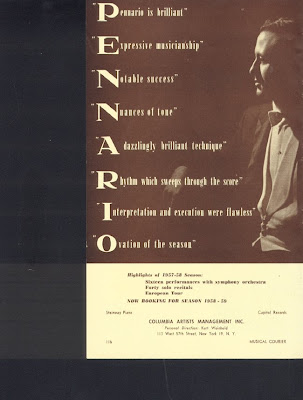 The great thing about Christmas Day being behind us is I got to call this old girlfriend of Leonard Pennario's. I tracked her down last week on the Internet and was so excited when I found her that I couldn't concentrate. I had to go out and walk around Delaware Park, just to calm down. That is how I get when I get a real breakthrough.

It is exciting but also a little nerve-racking too to call these people. You just never know what you will find on the other end of the line. This woman is younger than Pennario was, but still I think: what if there are health issues? What if I am calling at a bad time? And here's a goodie: What if her husband answers the phone? She is married to a prominent doctor. What do I say then? "Uh, I would like to talk to your wife about the smolderingly handsome Italian concert pianist she went out with before she met you"? That would go over big.

The good news is she answered the phone and she could not have been nicer to me. Within five minutes -- no, wait, within two minutes -- we were having the kind of conversation you never would have been having if I were a male music critic, I will say that. I have already written how I used to joke with Pennario about that. "You should have gotten a guy to write your book," I used to tell him. Which, I don't know how he avoided doing that, because there are almost no woman music critics. Leave it to Pennario to find me.

"This is awkward, because I am a stranger, but I understand that he asked you to marry him --" I was saying.

"Oh, you can ask me anything," she was saying. "What was your first name again?" Now we are first-naming each other and it was yak, yak, yak.

The one thing that bugged me was when she told me that Pennario was more romantic and serious about her than she was toward him. She said she was not as serious about him.

It just came flying out. I was getting outraged on Pennario's behalf. I was thinking of how he looked, like in that heart-stopping picture above and this one ... 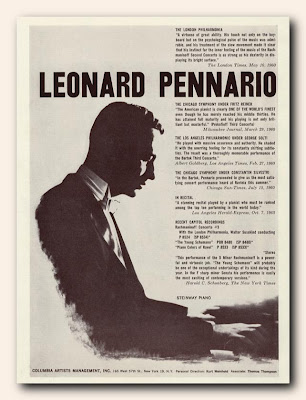 You mean this didn't do it for her? What was she, made of stone?

It didn't matter to me when she explained to me that she was put off by the itinerant life of a concert pianist, that she wanted a steady life. I am sorry, when someone like Pennario comes along, you drop everything. Heck, I did!

With which, I made it a point after that subtly to work in things about how great Pennario was and how he is one of the towering virtuosi of the 20th century and for that matter the greatest pianist America ever produced, just so she could regret her unfeeling actions, at this late date.

Other than that she and I got along very well and we will be talking again very soon. I am going to talk with her husband and also with her sister.

It is the least I can do in service to musicology.
Posted by Mary Kunz Goldman on December 30, 2008