Sittin' on top of the world 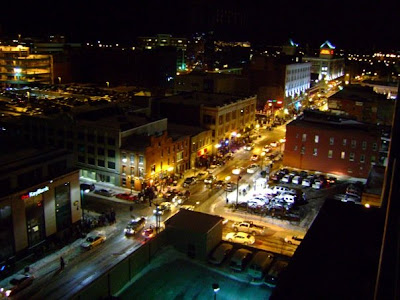 Remember that song by Howlin' Wolf? I can't be the only Howlin' Wolf fan out there, can I? Anyway, I felt I was sitting on top of the world downtown lastnight, looking down on Buffalo's New Year's Eve celebrations. Howard and I went to a party at my Uncle James and Aunt Marce's gorgeous condo in City Centre where they have just moved. Is any city more beautiful than Buffalo? I ask you.

Uncle James is technically not my uncle but he was my father's best friend. He gave me away on my wedding day. I told someone that at the party lastnight and whoever I said it to looked at me and said: "But here you are back!"

What do you say to that?

I didn't take the picture up above. My cousin Gretchen's son Alex Aylward took the picture. We call all of Uncle James and Aunt Marce's kids our cousins because it is easier than explaining everything. Alex went out on the balcony to take the picture but no way was I going out on the balcony when it was 7 degrees. So I am cribbing the picture brazenly off his Facebook page. Alex took a lot of pictures, I am delighted to say. Here is a picture of the buffet so you can see how perfect everything was. 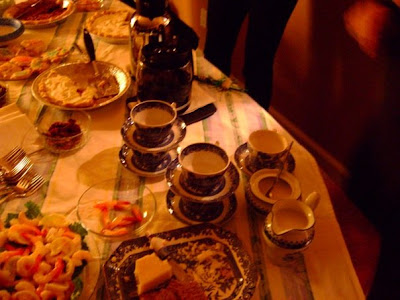 What other pictures of Alex's can I steal? Modern technology is so great. You don't have to do any work yourself any more. Oh, look, here is a picture of the family after everyone left. This would have been around 1:30 a.m. I am guessing. I am in the middle next to my Uncle James, who is in the pale blue sweater with his arm around me. Howard is on the other side of me with the sparkly blue Happy New Year hat. I was wearing a New Year's tiara but darn, I must have taken it off. 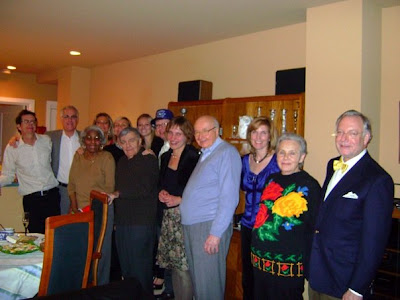 Howard is wearing one of Leonard Pennario's ties but it is hard to see that in the picture. May I draw your attention to the gentleman on the far left? That is my cousin Jimmer. I adore Jimmer and he is famous for leading the band Bobo. Jimmer's stage presence is closer to Jagger's than anyone's I have ever seen.

Another thing about lastnight. Remember a little while ago at the Twentieth Century Club when I found Howard talking to that priest who I am pretty sure heard my confession at St. Michael's? He was there lastnight too. The priest, I mean. When I walked in he was the first person I saw. He was sitting drinking a glass of red wine. Of all the priests in the world I could have gone to Confession to I picked one I was going to see on practically a daily basis! That is the way my life is and I do not see it being different in 2009.

Here is one more picture Alex took lastnight. It is of the Electric Tower. Note to out-of-towners: Here in Buffalo we don't have to drop the ball on New Year's Eve from just any old building. We drop it from this one. 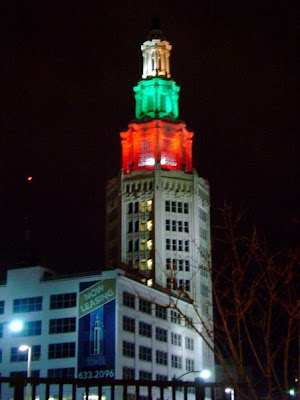 After lastnight's idyllic gathering I awoke this morning dissatisfied with my own disorganized, cluttered, squalid lot so I got busy cleaning up my act a little. It was not easy because I began 2009 totally behind the eight ball, completely forgetting I was going to go to church. No alarm, no anything, here I was, just sleeping and sleeping. I awoke at quarter to 9. I sat up and went, "Omigod! Mass at 9a.m.!" And I just flew out the door! No coffee, no nothing! I have not rolled out of bed and gone straight to church since I was 18 and playing the organ. I hate to think what I looked like. I hope this is not what all of 2009 is going to be like.

After church my brother George came over and ate and then Howard and I went for a pious walk around Delaware Park. It was funny to see all the New Year's exercisers, everyone's resolutions fresh. We did two rounds. And after that ... after that ...

I tackled my recycling!

An elephantine task! Because the schufts who collect the recycling skipped my bins two weeks ago. I think a car was parked in front of them so they didn't see them. It is terrible when that happens. You feel like such a loser, carrying these filled-up bins back inside. Then last week was the day after Christmas and the schufts declared an unofficial holiday. They didn't show up. Now my house is a sea of empty cider bottles and milk cartons and newspapers, newspapers, newspapers. And wine bottles. You should see my front curb at this moment. It looks like the Rue Franklin!

After that I tackled the ultimate frontier and washed the kitchen floor. Unbelievable. I cannot believe I did that.

And now here it is, almost dark. The first day of the year, almost over! This is how it goes. Lastnight I was watching the fireworks and growing teary thinking: Wow, what a year I have had! What a year to remember! Now the new year is one day gone. It does look beautiful, I have to say that. The tree branches are so dark and graceful. The sky and the snow are both the same deep blue.

I should call up Alex, and get him to take a picture.
Posted by Mary Kunz Goldman on January 01, 2009