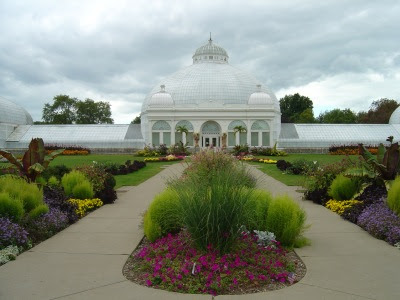 What a dark, dramatic morning. The snowplows and I are the only ones up. I am up early because I am heading out shortly to pick up my friend Jane so we can go and make our Christmas wreaths.

We will fashion our wreaths at the Buffalo and Erie County Botanical Gardens, pictured above. Note to out-of-towners: This is the kind of place where we Buffalonians go in the normal course of our everyday lives, to perform mundane tasks. Why make your wreath in a strip-mall craft store when you can make one in a conservatory designed by Lord & Burnham? That is what I would like to know.

Of course today the Botanical Gardens will not look the way it does in the picture above, with those beautiful lawns and flowers. It will look more like this: 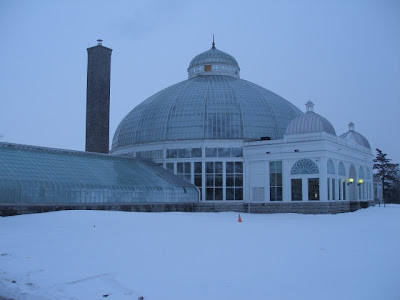 Observe the smokestack. Don't you love how all old public-use buildings included a massive smokestack? The Botanical Gardens opened in 1900.

Lord & Burnham also designed the greenhouse at Sonnenberg Gardens in Canandaigua. I spent a wonderful day there a couple of years ago with my friend Michelle, the Stephen Hough fan who commented yesterday. Before a certain concert pianist ate my life I used to do things like that.

I could find only this tiny picture of the Sonnenberg Gardens greenhouse but it is better than none.

OK, I have blown enough time on hearts and flowers. Is anyone else agog over this O.J. Simpson business? Look at him this morning on the front page of the paper.
. 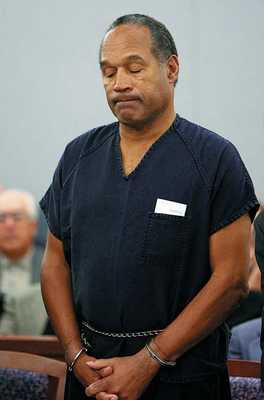 All I can think is that he did commit that double murder a long time ago, and that even though he beat the rap, in his heart he knew he was guilty and that his subconscious kept thinking he deserved to be punished. One way or another, he was going to be punished. All roads led to prison. And he found his way there, but by a different route.

When the O.J. Simpson murder trial was going on, my father used to say it was like Shakespeare. Not like "Othello," the play most people were comparing it to, in which the black man kills his white wife out of jealousy. My dad said it was like "Macbeth," when Lady Macbeth has committed murder and is in such a daze that even with the blood on her hands she cannot believe that she has done it.

The O.J. Simpson murder trial was in the air in Buffalo. Everywhere you went you heard about it and thought about it because he had been our greatest football hero and now he had become the center of this nightmare.

One day, I was out shopping. Again, this was before Leonard Pennario ate my life and I had time to do things like that. I think I was at AM&A's -- and two women, two African-American women, were going through the rack of clothes next to the one I was going through. I will never forget what one of them said. She was talking about how she had just been watching the O.J. Simpson trial on television.

Her friend looked at her.

"It was in his eyes," the first woman said. "It was the way he smirked."

Her friend said: "If he did it, he deserves to die."

They agreed on that, shook their heads and then did what we gals do, which is continue shopping.

I should have thought to tell that story back in October, when we were telling stories of the supernatural, including some spooky ones. Because this morning, that conversation drifted back to me. And I got a funny feeling.

I don't know if any of your readers look at the Dick Cavett blog in the NY Times (it's often funny), but, referring to the first Simpson trial, he writes that if he met the Juice at a party he'd chat amiably then say, "If you'll excuse me, I feel the need to talk to someone who hasn't murdered anybody."