A present from Ron Moss 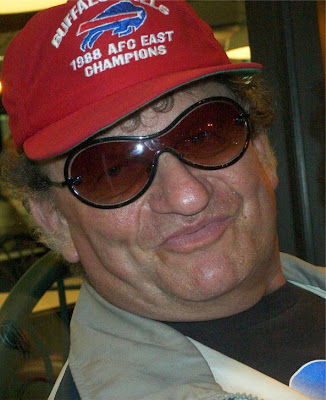 Buffalo cab driver Ron Moss. Please click photo for larger image.
Ron Moss tells me that there is a half-price sale at Amvets today. I might go.

Meanwhile, Moss gave us a present. He slipped it through the fence at Goldman Motors, which is the affectionate nickname we have for Howard's other property, the one that isn't Big Blue. Goldman Motors is a 1930s garage. After a couple of days of both Moss and me nagging him to collect the gift, Howard finally went and found it in a clump of weeds. It is a beautiful 2-LP box set of Beethoven's Ninth Symphony, conducted by Otto Klemperer and featuring soloists including Christa Ludwig and the great bass-baritone Hans Hotter.

Back to Moss. When Howard walked in yesterday, he had Moss on the cell phone. Howard has a lemon of a cell phone and right now it only works when you put it on speaker phone. This makes it complicated when Moss calls -- you can't answer it in a normal social setting. Moss was in the middle of a round of questions. He loves to ask comparison questions. "Who makes more money, you or Donn Esmonde?" Esmonde is a co-worker of mine. "Who knows more people, Mark Croce or Myron Robbins?" "Who's more happily married, so-and-so or so-and-so?" (We do not want to include names in that example, because for Moss that question is code for "Who do you think fools around more?")

Yesterday when Howard walked in, I heard Moss asking: "Who was greater, Mozart or Beethoven?" There is a question you can argue for years, and one that can easily get ugly with the addition of a little alcohol. It is the classical music equivalent of the Beatles and the Stones.

It is fun to make up comparison questions of your own.

Who has wrought more destruction in my life, Larry Solomon or my brother Tony?
Who is more liberal, Ted Kennedy or my sister Katie?
Who was the bigger character, our late mayor Jimmy Griffin or the Australian-born composer Percy Grainger? There is no shame in mismatching people when it comes to questions like this.

That question, at least, I might be able to answer today. I hope there will be no incidents. Once I walked into Amvets and there were these kids, these teenagers, kind of congregating and poking each other and peering down one of the aisles. Following their eyes, I saw what they were looking at. Moss!

With him around, life is never dull.
Posted by Mary Kunz Goldman on May 26, 2008