A visit from Ari 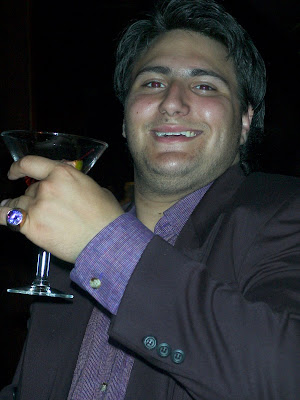 Ari Silverstein was the toast of Buffalo this weekend.

Yesterday our friend Ari Silverstein was visiting from New York City. We had a barbecue at our friend Gary's house. The culinary delights! Gary grilled sausages and made baked beans. Guy Boleri made potato salad. I made a chickpea salad, with cumin, carrots and -- this sentence is brought to you by the letter "c" -- chives from my garden. God knows how I was able to find the chives among the waist-high bishop's weed, but I did.

Ari himself, with his unerring sense of what is hip, contributed a box of doughnuts from Famous Doughnuts.

You have to love Famous Doughnuts. It is the closest heir Buffalo has to the immortal Freddie's Doughnuts, whose deserted drive-through still sits at Main and Michigan. I like Famous Doughnuts for its location on an unfashionable stretch of Main Street, and for how it proves that a little doughnut shop can hold its own against Dunkin Donuts, which all of a sudden is everywhere. Once Howard beheld an unforgettable scene in front of Famous Doughnuts. A big car was parked at the curb. And this woman who was huge -- something like 350 pounds -- came out of Famous Doughnuts carrying a box of doughnuts. She got into the car and the car sank down. What an endorsement for a doughnut shop! No wonder Ari recognized its greatness. 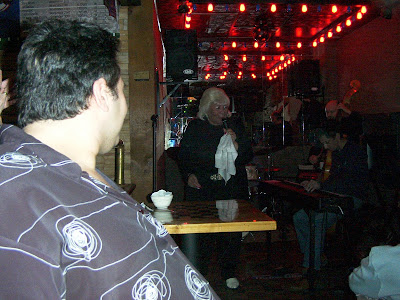 Ari Silvertstein studies his mentor Dodo Greene.
Ari has other redeeming qualities too. He is always talking about Mark Murphy and Mabel Mercer. He lets me talk about Leonard Pennario. And Ari is the world's best mimic, specializing in imitations of Dodo Greene, the singer we all miss so much who used to sing at the Anchor Bar. He shows promise in imitating Ron Moss, too. But that is like tackling Lear. It is this mountain for an artist to climb. It takes a lot of work and concentration to get it right. 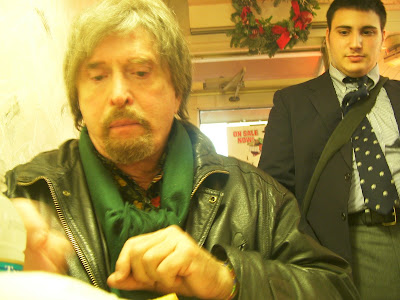 The inseparable Ari Silvertein and Jazz singer Mark Murphy.
Gary's house, where we had this barbecue, is the best. A while ago it was featured as The Buffalo News' Home of the Month, because what he did was take this Arts and Crafts Dutch Colonial and make it absolutely beautiful. He got these light fixtures from Target and dishes from the dollar store and bold shades of paint and somehow it all works. And Gary is not even gay! Despite decorating his house and being a dancer! How about that?

Like so many of us, Gary has urban concerns. His neighborhood (University Heights) could go one way, or it could go the other. He is trying to keep it from sliding. So he got mad the other day when these unsupervised kids across the street threw ketchup at his house. Actually they threw condoms filled with ketchup at his house. Condoms are something I never imagined being mentioned in my blog, but at the moment there is no getting around it.

Gary went and conferred with the kids' mother. He said, "I don't want this neighborhood to turn into a ghetto."

She got mad and said: "Now you're calling me ghetto."

He said: "Who called you ghetto? I am saying I don't want this neighborhood to turn into a ghetto. Kids are congregating at your house all day with no one around."

I am not sure how that conversation ended but it must have ended less than perfectly, because Gary felt he should apprise the police of the situation. More drama followed. The cop who came to his house to investigate told him it was just a little thing and he should forget it. "Right," Gary said. "So it's OK, then, if I come and throw ketchup on your house? That's OK, right? That's allowed? And you'll just forget it."

It is no wonder we have to cheer ourselves up with trips to Famous Doughnuts and visits from Ari Silverstein.
Posted by Mary Kunz Goldman on May 27, 2008