I Remember My Trip To Columbus, Ohio 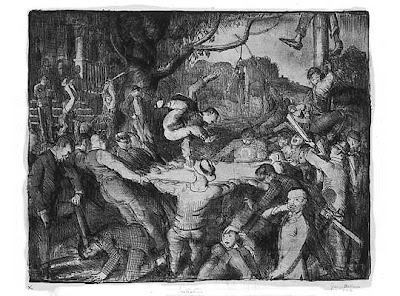 George Bellows' 1917 lithograph, "Initiation Into The Frat," eerily predicted events in Wilson.
A few years ago, at the art gallery in Columbus, Ohio, my brother George and I stood spellbound before an unbelievable picture. The picture was "I Remember Being Initiated Into the Frat." The artist was George Bellows. Bellows, who was born in Columbus and died in 1925, was a painter of the Ashcan school (a term I love). His did a lot of paintings depicting gritty urban life. Prizefighters were a specialty of his.

The painting George and I saw in Columbus showed Bellows' memories of the crazy frat inductions at his college. We couldn't get over it. Everywhere in the picture, something was going on: someone was being beat up or blindfolded or whatever. One kid was hanging. Even so, it wasn't a tragic picture -- somehow, you didn't get the sense that anyone was being seriously hurt. It was more as if the picture showed the nuttiness and stupidity of frat life.

George (my brother, not Bellows) reminded me of this picture yesterday. What got us talking about it was the recent sordid frat hazing in Wilson, N.Y. A little like in Bellows' picture, no one's dead or seriously hurt, but it's just... yecch, as they used to say in Mad magazine.

Clearly, this sort of stuff has always been going on. Maybe not of the ridiculous lowdown nature of the stuff that happened in Wilson, but still. (That is a little tease for our out-of-town readers, who will be scrambling for Google to find out exactly what did happen in Wilson.)

What about medieval Heidelberg, where students used to duel?

What about Old Heidelberg beer?

Back to Bellows. I have just learned that he made a lithograph after his painting of frat life. It is called "Initiation Into the Frat." It is at the San Diego Museum of Art.

When I go next week to see Leonard Pennario, I will have to go see it.
Posted by Mary Kunz Goldman on May 09, 2008