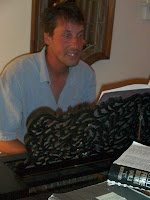 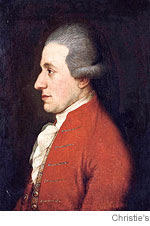 Interesting stuff this morning in the Wall Street Journal. Their drama critic, Terry Teachout, reports on a new Mozart portrait that has turned up. It proves something that will revolutionize music scholarship: Mozart looks like my brother George. I am going to have to run pictures of them side by side, so everyone can see what I mean.

Meanwhile, there is the matter of Greenwich, Ct., behaving like Buffalo.

The Journal reports on the front page that some creep has knocked down a mansion called Greyledge built by an aviator killed in World War I. Designed by the same firm that built the New York Public Library, it had 13 fireplaces and a shooting gallery. The guy who tore it down had bought the place a few years ago for $7.6 million. His reason for razing it? "Planning on building a house," he emailed the WSJ.

This is apparently one of many such cases in rich old Greenwich, which judging from this article is losing its old buildings even faster than we are. Developers are buying them up and razing them to make way for new houses.

We have to do something about this worship of the new. We can't just let it continue. Here in Buffalo, too, people are always believing that new is better. I've noticed it especially applied to poor neighborhoods, such as the East Side. People want to give the neighborhood a boost, so they put in something new. As if to say, "You deserve the best. We're going to knock down this old school (or church, library, firehouse, whatever) and give you a brand new one."

There is something nice about that brand-new feel. Driving your new car home, you revel in the new-car smell. Living in a brand-new apartment can make you feel pristine and pampered. I lived in a new apartment in San Diego recently for a few months. Well, it was slightly used... somebody had died in it. But that's another story for another day. I enjoyed the newness, is the point. The white tub, the Home Depot tiles in the kitchen, the sliding patio doors.

But that newness wears off fast. And once it's gone, you're often left with something blah, dated and, possibly, cheap. Look at those slightly-used new-build McMansions you see for sale in the Home Finder. They look so forlorn! Even my nearly new apartment in San Diego, by the time I left, was hitting the skids. The towel bars in the bathroom were wobbly, an electrical outlet had come out of the wall and -- this was the worst -- I found a worm on the living room carpet that had apparently crawled in under the patio doors. Ugh! Oh, how I want to go right back to Buffalo! Oh how I want to go home! Because back in Buffalo, my 1920 house just keeps chugging along, forgivingly, requiring minimal maintenance, looking good despite the scant attention I pay it. You can't beat the old. Trust me.

How is that for a brooding thought for a rainy Saturday? I think I'll turn back to that portrait of Mozart.

Who knew he looked so much like my brother George?
Posted by Mary Kunz Goldman on April 12, 2008

Email ThisBlogThis!Share to TwitterShare to FacebookShare to Pinterest
Labels: Preservation