Another one rides the bus 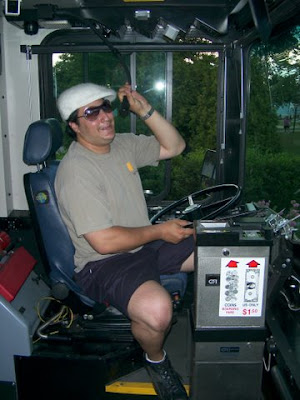 Thanks, Chris Byrd, for your erudite observation on yesterday's rumination, "The Nut, at His Nuttiest!" (I stole that title, by the way, from an old ad for a Jerry Lewis movie, "The Errand Boy.")
I like how Chris looks at life, which is often through a camera. Once, on an ordinary Sunday morning, he shot a video on his way to Mass at Corpus Christi. The video showed the quaint but run-down houses of the East Side, the Broadway Market, all kinds of haunts that Chris and I both love -- which is how we know each other -- before winding up inside the church, with the statues and candles. I know great art when I see it. I watched that video three times.
About riding the bus, I have logged a lot of miles! Out of pure laziness, I didn't get my driver's license till I was 26, and then I got it only because I got a night-shift job in Niagara Falls, a situation where public transportation was out of the question.
Being good at riding the bus is a skill that serves you well in life. I still take the bus sometimes on terrible winter days when I think if I drive, I'll die. Once I took the Metro Rail to meet friends at the Anchor Bar. You would be surprised at how many people have never ridden the Metro Rail. Howard never has.
A few of my top public transport experiences:
1.) Riding the Grant Street bus with friends from my old job. We'd put our arms up in the air as if we were riding the Comet, and everyone on the bus would crack up. That No. 3 route is no joke. Once, someone actually saw the bus go up on two wheels and go down again.
2.) This is my sister Katie's story but it is too good to omit. She was standing at a bus stop and this guy was pacing back and forth, apparently rehearsing a speech he was going to give to tell someone off when he got to his destination. "Kiss my a--," he said, emphasizing the last word. Then: "KISS my a--." He kept trying the phrase different ways. We have never forgotten that.
3.) I dated a guy I met on the UB shuttle bus.
4.) Once I ran into an unpleasant social situation in Hamilton, Ont., and had to make my way home. I found the bus station, grabbed a bus, arrived back in Buffalo, boarded the Grant Street bus and -- there was my sister Katie! On that bus! What are the odds?
5.) Those steep Metro Rail escalators in their long tunnels, they're like something out of "Batman." And when schools let out in the afternoon, the schoolkids are wild and crazy and they love to ride the handrails and scream and hurl themselves all over the place. Once, after work, I thought I was going to die, I was so tired and the place was such a zoo. Then the gentleman on the step ahead of me turned around. "This," he told me, shaking his head, "is why I hate working this shift." His sympathy cheered me up and made me laugh.
6.) A bunch of us were in Paris a few years ago and riding the bus through some suburb and when our stop arrived, my brother George got up, went to the front of the bus and announced loudly: "All Americans off the bus. All Americans, disembark now." All the Parisians were dying laughing.
Perhaps there is a touch of Ron Moss in everyone!
Posted by Mary Kunz Goldman on April 24, 2008

the characters in your life!