Back to the Broadway Market 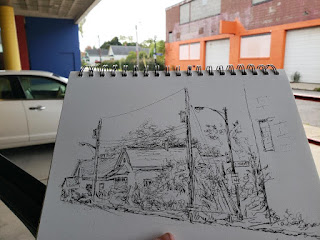 Today at long last I went shopping at the Broadway Market and the Clinton Bailey Market. And I made a decision:

Hereafter I am never shopping anywhere else!

The prices were great. The food was great. That and, I had fun. I did two drawings. One is up above, a quick ink sketch of some houses on Gibson Street. It is in ink so it can count for Inktober! I will finish it up tomorrow. Meanwhile ...

I cannot believe I ever left and started shopping at other places.

It was kind of an accident that I wound up going back to my old ways. What happened was, today Howard wanted me to go looking for chestnuts. And so I thought, as used to think: Broadway Market! Clinton-Bailey Market!

I did not find any chestnuts, let us get that out of the way.

However! I did buy: a quart or so of Steuben grapes; four eggplants, a Savoy cabbage; a red cabbage; a basket of dent-and-scratch red and yellow bell peppers; a basket of use-them-or-lose-them summer squash; Cortland apples; Crispin apples; three small pumpkins and a big one; and a big bag of red onions, some of which I have already caramelized with bourbon and enjoyed with T-bone steaks.

The T-bone steaks came from the Broadway Market. They were something like $6 a pound.

The market had a new façade I had never seen. It shows how long it had been since I had been there. Inside, however, it was the same as it always was -- minus, unfortunately, the vegetable stands, although I hold out hope. I do not know if they are gone for good or what. Perhaps they are not.

You could shoot a cannon through the place. 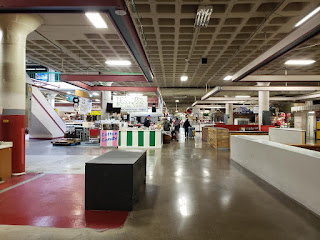 That did not upset me because it was business as usual. I purchased a lamb roast; the steaks; and a pound of bacon at Camellia. I enjoyed the meat counter, with things like Hog's Maws and Pig's Feet. 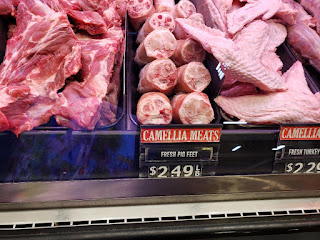 The prices for everything were way less than I was used to paying. I celebrated my savings by splurging on wasabi olive oil. There is an olive oil stand at the market that I love. It is next to the spice stand. I have to take inventory before I shop at the spice stand. One thing is for certain, though, I will be shopping at that spice stand.

I will be back next week.