Walking and Talking in Delaware Park 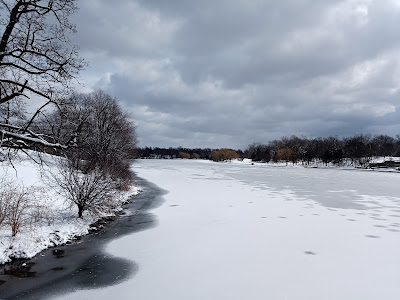 In Buffalo a walk is not a walk. It is an adventure! That is because in our town strangers talk to strangers.

When I go for a walk I do not always talk to everyone. Sometimes I am antisocial. However today is one of those days when I cannot shut up. I think it is because I am a little under-slept. When I could use more sleep, that is when I talk. And I keep talking!

As soon as I walked into the park I spotted two people putting their skis into their car. I approached them and asked how the snow was for skiing. On account of I had thought about bringing my skis but I had worried the snow was too wet.

I was right as it turned out. "Terrible!" the woman said in answer to my question.

Then we all laughed about times when we had been stuck clumping around on our skis.

Subsequent conversations as I went on my way involved dogs, little kids and that Buffalo classic, the weather. A protester, an Indian guy, was on the pedestrian bridge over the Scajaquada. He was holding up a big sign and drivers kept honking at him. I hung out with him for a while, exchanging views and opinions on world events.

It was windy and when the wind blew, you could almost call it bitterly cold. So there were not many people out. I would venture to say that I ended up talking with most people I passed.

In between I took some pictures, including the one up above. Is this Siberia? No, it's Buffalo! 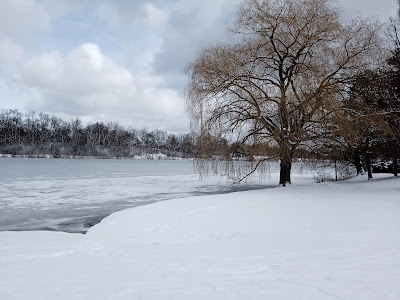 David looked chilly standing there in his altogether. 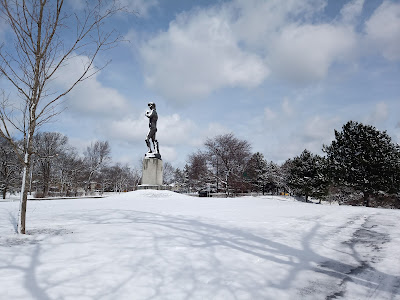 Across the way Mozart had a powdered wig. I did not get to take a picture of that. It was actually not easy to take pictures because the bright light made it hard to see what you were getting in the shot.

The Great Gates of Kiev! I mean of Nottingham Parkway. 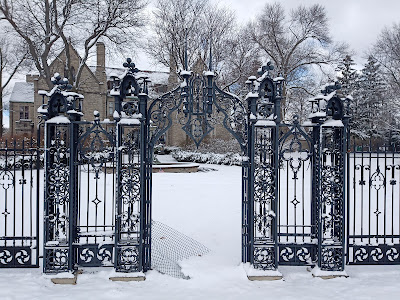 I love this iron fending they put up by the Miller Mansion. 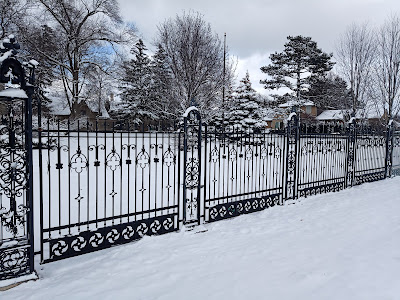 And I love the lanterns you pass in the park. 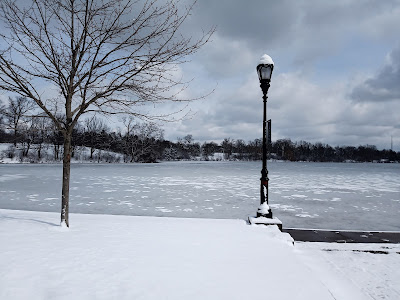 Look at these vistas.

I am so lucky to live where I do!