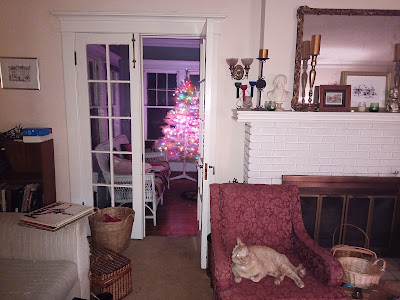 Tonight I put up my tree. I always report on how that goes and this year will be no exception.

However it will be different.

What a struggle this was!

I actually put up the tree yesterday. Today I set out to add the lights. Normally this is no big deal. But this year, ay yi yi.

I made history. This is the first time I ever put all the lights on the tree -- and then took them all off again and started over!

Has anyone ever done that in the long history of Christmas trees? I bet not!

However. I realized I had no other colored lights on white strings. Also this new one I got, it was so short that it reached only halfway around the tree. For crying out loud! I had assumed it would at least go around the tree twice or something.

Fie on this string of lights!

So I took down the lights that had been strung up around the sun room and pressed them into service. Eventually I had the tree covered. But it did not look right. I fussed and fussed with it. I overlapped strings, looped them around in U-turns, tried this, tried that. But there was no getting around that the tree was well lit around the bottom -- that's where the new string was -- and kind of sparse in parts around the top.

Not only that but you could see wires. "I don't want to see any wires," Marvin Hamlisch said his mother told him when he got his first apartment. Hamlisch would gab on and on at Holiday Pops concerts and you would die you were laughing so hard. Anyway, you saw wires when you looked at my Christmas tree. That ain't right.

I worked and worked, trying to fix things. My Cat Jeoffry yawned and went to sleep. 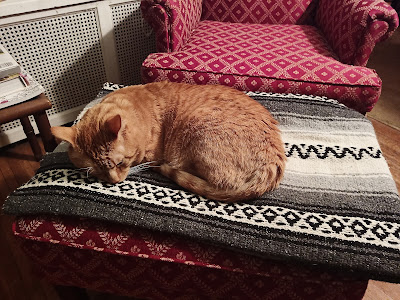 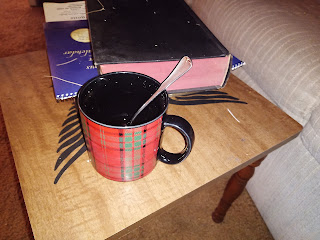 I kept working, grimly, in silence. About a half an hour later I gave up. I started tearing the lights down. I could not believe I was doing that and when I was half way through, I bitterly regretted it.

However. There was no turning back!

The story has a happy ending. When the lights were all off the tree and lying all over the floor, I flipped the record over and started it again. Carmen Dragon's "O Christmas Tree" filled the room. It made my house feel like a 1939 movie set. I started the lights from scratch, putting the new lights in the middle instead of on the bottom. And in five minutes I was done. 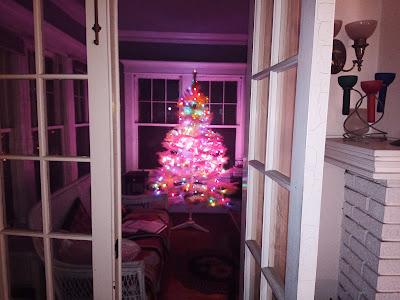 One for the books!

I don't know why the Google calls me Sensibly Shod Commoner, and I don't have the tech rips (or inclination) to figure it out. It's Libby! 😍