The Adventure of the Seven Churches 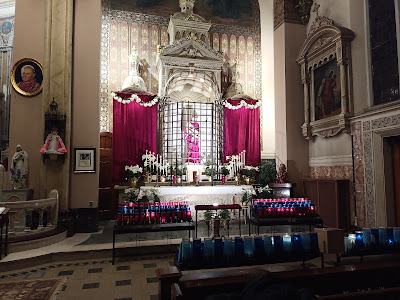 Last night I visited the Seven Churches. It is a wonderful and mystical Holy Thursday tradition!

Typically what happens is, you go to Mass at the church of your choice, and then you visit six other churches. Technically you visit the churches for Adoration although you do end up doing a lot of visiting and chit-chat too, in whispers of course.

This is the fourth time I have done this. The first time I did the Seven Churches it was with my friend Oscar from church. Like most great adventures it almost did not happen. I had a migraine that day and I had told myself I would not do it. But Oscar caught up with me in the parking lot after Mass and he said if I could not drive him, he could not go. Oscar is a med student at UB and you know these students, they have a way of getting you to do all these things you would not otherwise do. Anyway, I went.

And what a life experience that was! There is just something about doing this, I do not quite understand it. It gets to you. The churches are softly lighted and people are praying and whispering -- and Our Lord is there in the Altar of Repose. Oscar and I knelt at each altar and he sort of led our prayers, in Latin, in English, and in Spanish because that is his native language. People were walking in and out of every church. And here in Buffalo even non-Catholics and atheists like to get on board and visit the churches just to look at them, and they are respectful and somehow add to the mystique and the community feel. I remember that first year as just so beautiful.

I loved it so much I decided that year I wanted to write about the tradition for The Buffalo News -- and the next year, 2018, I did that. I also visited the churches in 2018 and 2019 with friends from church. Our church, St. Anthony's, always has a kind of informal caravan making the rounds.

This year I just ended up going by myself!

Our Mass was at 6 p.m. and it went late, past 8. This made it a challenge to make it to six more churches because some closed at 9, others at 10, and I do not know who stayed open after that.

So, pedal to the metal. I went to the Cathedral first. I had never included the Cathedral among my Seven Churches and I am happy I did! Their Mass was finishing up and I hung out in the back and waited it out. 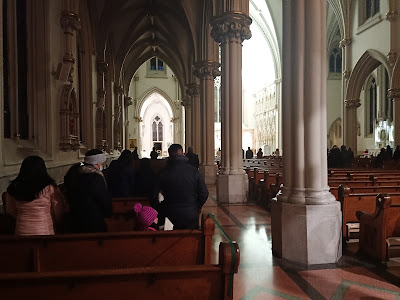 Just to see them darken the church, it was haunting. Then my old friend Oscar materialized along with some other friends from church and he shepherded me into the chapel where the altar was. I do not think I would have found it otherwise.

There were candles lighting the way. It was so beautiful. We knelt on the floor and prayed and then we left the church and went our separate ways. I went to St. Michael's, which as you might remember was the scene of my great Confession adventure of 2008. 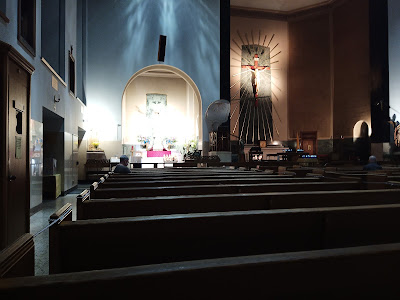 Leaving St. Michael's, I hastily headed to St. Louis. I heard the church closed at 9 so I had to hustle. 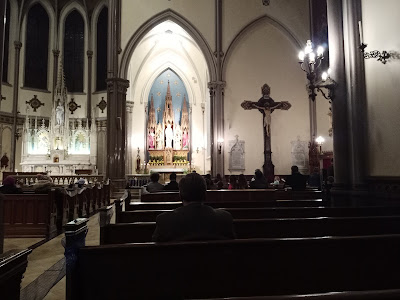 At St. Louis I ran into a group of guys from church who invited me to carpool with them. It was nice of them and I wanted to but I did not want them to have to return me to St. Louis to get my car, so again I went my own way. We set up loose plans to meet in Polonia because rumor had it the churches out there were staying open later.

I drove out Broadway, as they say. The guys were heading to St. Stan's but I saw Clark Street and there was Corpus Christi, at the corner of Clark and Kent, we kid you not. The narrow streets were packed with cars. It seemed half the city was here. 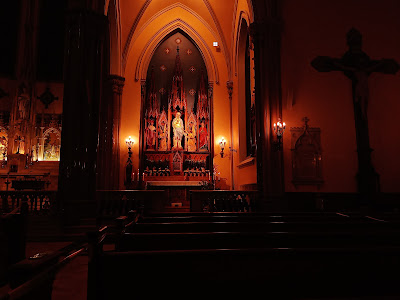 You could just stay there forever, you know?

But time was flying. A quick prayer and back out into the night I went. Next I did St. Stan's. 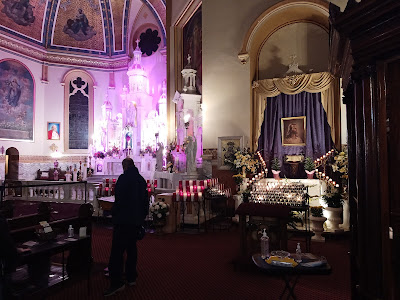 St. Stan's stands out on my list this year because, I realized later, it was the only church where I actually -- well, I hate to say this but I am not sure I ever actually prayed there. I ran into some people I had not seen in a while and I met some new people and I am afraid I just gabbed! Even wearing a mask I can get into all this trouble! Anyway, that was Church No. 6.

One church to go. What to do? What to do??? It was only about 9:30 but those minutes evaporate pretty quickly if you do not have a plan, which this year I absolutely did not have. At St. Stan's I had run into my friend Olivia -- our paths were crossing constantly throughout the evening -- and she said she and another friend, Daria, were headed to maybe St. Adalbert's Basilica. The "maybe" was because not one of us was at all sure where St. Adalbert's actually was. All Olivia knew was on a street called Stanislaus Street, wherever that was. Get this, St. Stanislaus is not on St. Stanislaus Street! But St. Adalbert's is.

Now I made my one strategic mistake of the night. Because I did not know my way to St. Adalbert's, I thought I would follow up on this secret dream I had of getting to Blessed Trinity. That is this stunning massive church where two years ago I remember they had fashioned an altar of transcendent beauty. I got back in my car and headed downtown toward Main Street.

Then I thought: Mary, you can't do this. It was 20 minutes to 10 and Blessed Trinity would be closing at 10. That was what I had read. So I did a U-turn, pulled over, and in desperation consulted my phone about St. Adalbert's. The phone said I was three minutes away!

It was not easy -- the church was on this narrow dark street, and at first I was waylaid by another church that turned out to be the hulking, reproachful ruins of Transfiguration. I had to circle the block to correct my mistake. But finally, I was there. I saw a bunch of cars, which helped. There were so many people doing the Seven Churches that you could almost just follow the herd. This magnificent Eastern-looking church, St. Adalbert's, suddenly just appeared like something out of the ether. I could almost hear the angels singing. I ran up the stairs and there were these ladies greeting people at the door.

"Good for you!" they exclaimed.

Normally I hate when people say "Good for you" but I was so happy I had pulled this off that I did not care. That is St. Adalbert's at the top of the post. Here is another picture. For most of the churches I snapped just one picture but at St. Adalbert's I could relax because it was my final church. 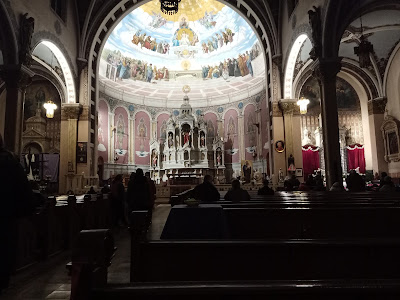 At St. Adalbert's, by the way,  I ran into the guys from our church who had kindly invited me to carpool. It was not their last church. But I told them, it ain't over till it's over. I think some of these churches were staying open later than they had stated.

I also think however that your chances of visiting seven churches in a time crunch greatly increase if you go solo. You do not have to consult anyone when you need to make a U-turn or change plans. You need not deal with anyone who has his or her heart set on one church or another. And here is another thing, you go with another person, and what do you do when you look at the clock and know you need to move on, but your friend is kneeling deep in prayer? Answer me that.

So I learned a thing or two -- and -- well, as always, the experience was, in a way, indescribable. You have to try it to understand. Good Friday -- today -- blazed with sun, even if the temps were in the 20s. As I was walking around the park this morning, my mind kept going back to last night, and that dark, hushed feeling.

Loved reading this! If you have not been to St John Kanty on your journey I hope you will make it next year! St John Kanty is on Broadway, not too far from Corpus Christi and St Adalbert. Happy Easter!

I love being invited to St. John Kanty! I will make sure to go there next year. Maybe we can meet! Happy Easter to you!!

What a wonderful adventure and journey that night. Love it. Love "hulking and reproachful!" Way to g-- er, I mean, thanks for sharing and inspiring, Mary! Libby (not sure why Google won't sign me in as me!)