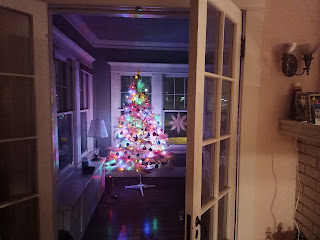 Not to shock anyone, but I do believe I have officially the last Christmas tree up in our neighborhood.
This year, I have to say, there were more contenders for the title. Especially along the "better" streets, like Nottingham and Middlesex, I saw trees up well into mid-January.

Some of those houses still have their lights up in the trees outside, which I love. And they have their wreaths up as well. But the trees are down. You know what, they were probably real, and real trees have to go out to the curb at some point. I sort of forget that. Good for those folks on Nottingham and Middlesex, keeping the season as it should be kept.

However. Tomorrow, Feb. 2, is the ancient feast of Candlemas which marks the end of the Christmas season.

After Mass the tree will have to come down.

OK, I will give myself till the next day. It is just that this year the tree is so pretty. I really worked on it. Just the other day I was rearranging some ornaments.

Let us look on the bright and twinkly side. I am very happy that last year I initiated my own new personal custom of leaving the lights up year-round. After they come off the tree they will go up around the windows. Like last year! 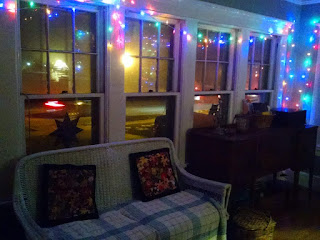 That is a nice compromise, is it not?

I sort of miss them around the windows, anyway. I was tempted to leave the lights up around the windows and get new lights for the tree. But then I thought: no. It has to be an exchange. Otherwise when you take the tree down you are losing something.

I refuse to be a loser.

Let there be lights!