Today on my way to Candlemas Mass I stopped and sketched Tempo. That is a restaurant occupying a beautiful old mansion on Delaware Avenue.

Is that correct, to say Candlemas Mass? Is it not just Candle Mass? Well, we say Christmas Mass.

It was fun, drawing Tempo. It took me out of my day. This is funny but I think the right way to draw a building is, you sketch in the shape, then you fill it out. I do not normally operate that way. I started in this case at the upper left hand corner of the drawing, and then I worked my way down. Always in ink, too, so you do not erase. If I worked in pencil I would always be erasing.

I was thinking, that all through my life, when I have done crossword puzzles -- any puzzles -- I have always worked in ink as well. My mother always used pencil. She used to try to reason with me because sometimes I would end up having to cross things out, and it would turn into a mess. But doing a crossword in pencil is no fun! The fun is writing in ink.

I am an ink-stained wretch!

I will have to finish the Tempo sketch and post it. I could take it only so far. No. 1 I had to go to Mass. Secondly, it was snowing and the window I was looking through, the side window, was getting snowy to the point that I could not see. I rolled it down to take the picture.

After Mass my car was covered in snow and I had to brush it off.

An observation on this year's Christmastide: It began and ended with snow!

On Christmas Eve we got our usual Christmas Eve snowstorm. I came out of Midnight Mass at, yikes, about 2:30 a.m. And my car was buried as was everyone else's. Heavy, wet snow. Buffalo. Got to love it!

Now on Candlemas evening I came out of the candlelit Mass and my car was again covered in snow. Not as bad as after Midnight Mass on Christmas, but still.

We have not gotten much snow in the interim!

Well, it is all worth it. Mass tonight, it was about two hours long, but when I came down from the choir loft for Communion, I was just overwhelmed by the beauty of it all. The church was dark and lighted only by candles. There were candles arrayed all over the high altar and the people in the pews were holding candles. It had looked beautiful from above but it was even more beautiful below.

Mozart and Beethoven and Palestrina must have gone to Mass in such an atmosphere!

I took this pic shortly before Mass but it does not begin to describe it. 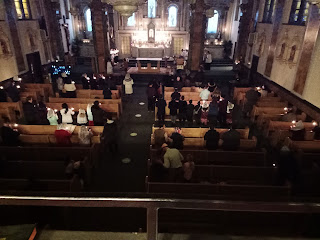 Most people go through their whole lives and never experience anything like this!

And on top of that we had a white Christmas.

The start, and the finish!