My Thanksgiving turkey and me

Yesterday my Thanksgiving was, like many others, extremely limited. It is in style here in Buffalo to defy the rules but everyone in my family was not all on the same page. End result, as we say here in Buffalo, it was just the three of us, Howard and me and Jeoffry.

With not much at stake I felt free to branch out. And one thing I did was try a new way or roasting turkey. Come Thanksgiving, I like to cook out of cookbooks by old dead people. And this recipe was from Bert Greene, this cookbook author who was in my parents' generation and whom I adore.

His cookbooks are just so funny! But that is a topic for another day.

For now, we are talking turkey. Maestro Greene said to put three strips of bacon over it and cut enough cheesecloth to cover the whole thing.

Then you pour a third of a cup of dry white whine and soak the cheesecloth in it and then put the cheesecloth over the turkey. Every half an hour you baste the turkey with this stock you make "meanwhile" from the giblets and such. Do not you love that word, "meanwhile"? It is as if the work gets done by magic.

"The Joy of Cooking," which I consulted first, had something similar. But they wanted you to soak the cheesecloth in oil. That just sounded yuchy to me. Just the idea of this oily cloth -- I said out loud in my kitchen, "I can't do that."

Somehow the Bert Greene, that sounded more like something I could do. And so I did it.

Here is my turkey with the bacon covering it. 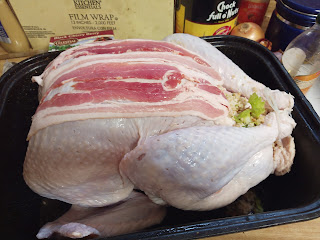 That is a pretty big turkey! Back when I got it I did not know if I would be cooking for a crowd or not.

Here is the cheesecloth soaking in the wine. I did not have white wine around so I used dry vermouth. 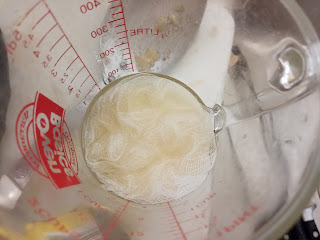 Next time I will not do it like that. Next time I will just put the cheesecloth over the turkey and pour the wine over that. Because when I fished the cloth out of the vermouth, it was a bear untangling it. It had twisted itself into a thin rope and I almost threw it out. But I did not throw it out, and I untangled it, and it did end up where God intended it to be, over the turkey. 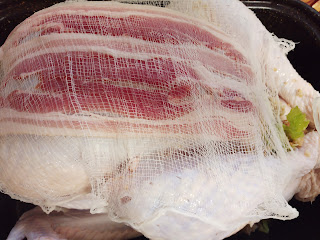 The turkey did turn out pretty darned good, I have to say. I stuffed it with Rice Dressing, from "The Joy of Cooking." I did that Rice Dressing a long time ago, and I liked it a lot, but everyone else in my family insists on bread dressing. Which, to be honest, I do not do all that well. They were not here this year and so I went back to the rice dressing.

It was delicious but today being Friday I could not eat it and so I could not refresh my memory. That big turkey in the fridge and I could not touch it. Penance. Penance! I had to quit it, cold turkey!

Tomorrow will be a different story.

I hope tomorrow lives up to the memories!