Today for my daily ink sketch I went driving around aimlessly looking for something and I wound up on Forest Avenue by the H. H. Richardson complex.

I mean I was at the Richardson complex! But I did not draw it. Instead I turned around on the bench where I sat and drew the brick building across the street. That is it up above! The picture so far is no great shakes but I am not yet through with it. I even had trouble taking a decent picture of it thanks to this strange big bright thing that appeared in the sky and was shining down. However, I will say this, that picture I drew does the job.

That is what I saw!

I think it comes from being a reporter and a music critic for so long but I love when I can look at a drawing I did and say that. Sometimes reviewing a concert, especially if the piece was new music, I did not want to give it a concrete thumbs up or thumbs down. So I would just tell myself, you do not have to be clever or have any great insights. Just say what you experienced. Say what it was like. That comes from being a reporter. That is what I do with drawing.

This building I drew, as you can see, it is kind of weird!

I have wondered about it forever. And while I was drawing, a stranger stopped by as strangers often do.

"What was that building?" I asked him.

That's right ... there had been a head! A big head in front of a building -- was it this building? It was like out of that Russian opera "Ruslan and Ludmilla." In "Ruslan and Ludmilla" the big head appears in a forest and in Buffalo the big head appears on Forest Avenue. Surely somebody had that in mind. Anyway, there was a giant white Victorian head parked in front of some building on Forest and that was what this gentleman was talking about.

"I did see the head!" I exclaimed. "But not recently. Was it here?"

Neither of us could figure that out. But it turns out yes, here was where the head was. Online information is scant but I was able to learn that the head had been a replica of a decoration at the Pan-American Exposition in 1901. I sort of remembered that. Unfortunately the head was made of Styrofoam and so could not take our winters and fell apart.

Here is a picture of the head which is gone now. We lost our head! 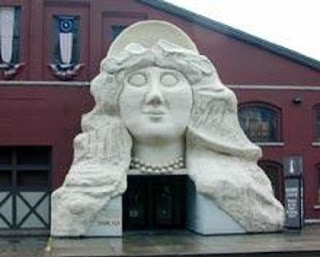 But there is that building in the background, sure enough. So...

It turns out it was a streetcar repair barn. It was built in 1895 and it was used for the Pan-Am trolleys, among other trolleys, I imagine.

I should have guessed. It is mammoth! And there are all these huge windows and doors.

Now it is owned by the Buffalo History Museum. It is a Resource Center but it reminds me of Willy Wonka's chocolate factory because nobody ever goes in ... and nobody ever goes out. That was always the case. I mean even before the pandemic.

This is why I draw.