A morning in the Japanese garden 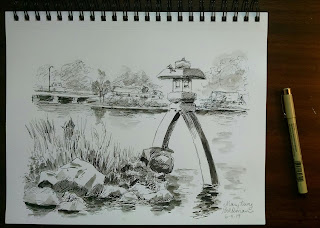 This morning the sun was out and so I took my sketchbook when I went walking in the morning. I found myself at the Japanese garden.

Decades from now when scholars debate the deep meaning of my work they will point out that this picture has philosophy behind it. In the foreground is the Zen of the Japanese garden. In the background you may make out trucks and cars barreling along the expressway.

Yin and yang! That is not Japanese, I do not think, but it is close.

That is a strange little sculpture and yet I love drawing it. I love the curve of the legs it stands on. It is a funny thing, drawing in ink. You do not get a second chance if you goof something. Well, you can turn the page and start again. But that is the only second chance you get.

And so I get in the zone. I make sure that the line is supposed to go where I am about to draw it. That is what makes pen better than pencil to my way of thinking. I discovered that last fall when I did Inktober. With pencil you get too sketchy and just start anywhere. With a pen you must have a plan.

Somehow the legs of this sculpture just draw themselves. And pen does stone so well.

The rocks were fun and so was the grass.

Here I am working on it. 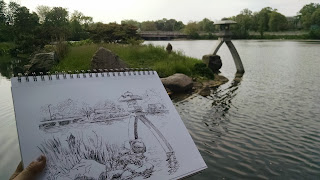 It was a beautiful hour or so I passed drawing that picture. It was warm and sunny for once and I feel good that I was out there in it. I was so relaxed and the air was so fragrant and now that it is raining again as usual I wish it were this morning again.

I wish I were back in the Zen zone!