A foggy day in Buffalo town 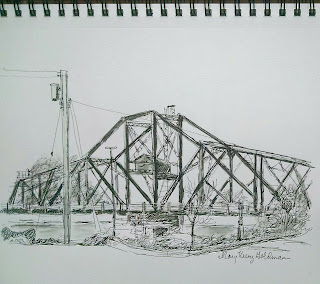 Today was the Buffalo Marathon and I used that as an excuse to bike to my 9 a.m. Mass. Usually I help out with the coffee hour and have to bring baked goods but today the hall was rented and so there was no coffee hour. And so I was at liberty to bike.

It was fun biking. Your day feels different. At 8 a.m. the city was swathed in fog. It was like San Francisco! Or like that beautiful little poem by Carl Sandburg you learn in school.

It sits looking
over harbor and city
on silent haunches
and then moves on.

I had that memorized! When I reached downtown and got to Big Blue I sent this picture to Howard. 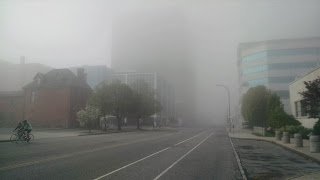 I thought of the Sandburg poem and also Bismarck "Bix" Beiderbecke's "In a Mist."

Wow, listen to that. Bix on piano!

Mass was long because we are singing a lot of Gregorian chant these days and just taking our time. We are in no hurry. Summertime, and the living is easy. It was almost 11 a.m. when I returned to my bike. The fog was still there. It had not gone anywhere!

I pedaled leisurely in the direction of home, more or less. I went along the Riverwalk. 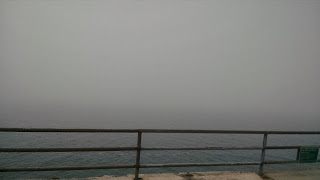 There is an amazing juncture where you get a panoramic view of the Niagara River. The Peace Bridge had gradually appeared from the mist and here it is. 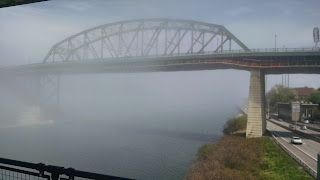 Eventually I found my way to Unity Island, formerly Squaw Island. I love railroad bridges and the one to this island is a beauty. So I sat on a curb and took out my new ink pens and drew the picture at the top of this post.

I sort of wanted to wash in the clouds later but I like the lines of the picture, its angular nature, so I will think about that. While I was thinking I biked over the bridge. As I wrote on Instagram it felt like family now that I had sketched it.

On Unity Island I found the bike path and it takes you right by the river's edge.

Unfortunately at this point it also got really cold! It felt like summer in the Arctic circle. It looked like that too. The waves of the river just disappeared into the sky and you could not tell which was which. 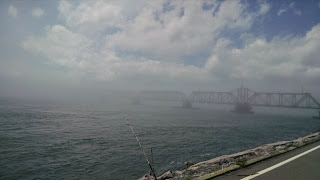 Next time I go there I will draw that beautiful International Railroad Bridge that appears in the mist in that last picture. OK, to tell you the truth, I already did draw it. I could not resist. It was so dramatic and I drew my picture in the presence of several Border Patrol agents. They were parked there keeping an eye on the bridge.

I loved this foggy Sunday.

I am glad I have so many pictures so I can remember it.