My experience with Aldi delivery 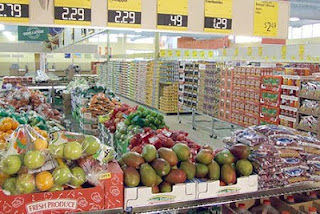 Anyone who knows me or has ever read this Web log knows of my love for Albrecht Discount, affectionately known as Aldi. I adore Aldi.

I wish I could charter it the way my mother told me that the Queen of England charters Harrod's! When the Queen goes Christmas shopping, so my mother said to me, Harrod's would be blocked off just for her.

Unfortunately that is not the case with Aldi and the one I go to is small and overdue for a makeover and expansion, which thank heavens it is getting. It is getting cramped and one aisle is even so narrow now that I cannot get down it comfortably even with the 10 pounds I lost over Lent. And it is super-crowded.

No more chatting, here is the report. It was easy to do the online shopping. The menu of items is easy to navigate and I happily shopped away. You cannot buy markdowns online but you know what, there have been a million times I went to Aldi and did not find any markdowns I wanted.

Placing the order was easy and there is this promo code on the delivery site which gives you $10 off. That made up for the nickels and dimes that turn up added to the prices online. However, 89 cents for a dozen of those fine Goldhen eggs, who can argue with that?

I shopped my way up to about $50 and then placed my order. After that Instacart got really chatty, texting me to tell me that my order was placed, that it had been delayed, that it would be there soon, and then -- ta da! -- that my shopper was in my driveway!

End result, as we say here in Buffalo: Two items out of the 15 or so I ordered were wrong. I ordered the 1-pound clamshell of the organic spring mix. I am not an organic fanatic but I do like organic lettuce. Instead the shopper gave me the, ahem, Artisan Lettuce ... 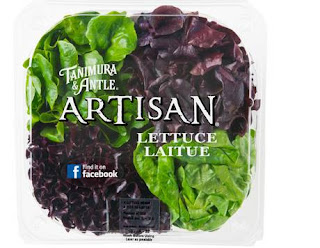 ...  that smaller clamshell with four heads of lettuce. I felt I had to kvetch about that seeing that the price was very different.

Then I had to call about a discrepancy with the chicken, too.

The cauliflower had spots and would not have been the one I would have selected.

Everything else looked pretty good. The cabbage looked dandy and the eggs were unbroken, no problem there.

It took a while for me to figure out how to address my grievances. That surprised me, because I am good with computers. It just was not intuitive. Eventually, I managed to find a phone number, and so I called.

They refunded me the money for my organic greens. The chicken was actually a trade-up -- I had ordered a normal chicken, and they had given me some kind of snobby free-range bird that would have cost more. So I was the winner there, and we let that be.

I did go ahead and mention the spotted cauliflower, just because I wanted to give Instacart honest feedback on how they were doing. To tell you the truth I do not see this situation improving. People can't read. You can put one item on your list and they will bring you another. Also, nobody knows anything about vegetables. I am sure my shopper could not tell one cauli from another. So if you get delivery you have to brace yourself for some problems.

It did not help that Instacart promises you the moon. In the days leading up to this they had been strutting their stuff sending me emails with things in the subject line like, "Mary, prepare to be amazed!" Honest, that was one. I am quoting it exactly.

Now here is where things get psychological.

I realized I felt bad after making the phone call. I hated being seen as a crabby complainer. Also, on the Web site, the only way you can report an "issue" with your order is to give your delivery person a "bad" rating. There seems to be no other way. It is weird.

And then there was the matter of the tip. I had not realized the tipping is electronic. They add in 5 percent and if you want to give more you can do that after you get your order, add it in the way I think people do on Uber.

I actually like this feature, but they were not clear about it, and so I had given the shopper and her friend $5 cash. Then I saw that online I had already given them $2.50 or something so I canceled that. I thought: I gave them twice that amount, and they screwed up my order. I'm not going to give them, like, $7.50. Then I felt bad, as you do in these situations. Would Instacart be angry with them when they saw the tip was canceled? God knows I have had my share of lowdown jobs, I mean back in the day, and I sympathize, and I do not want to make a blot on anyone's record. Could I have handled that differently? I should have read things more carefully. I should have --

Finally I stopped and said, oh, for Pete's sake!

Why am I feeling as if this is somehow my fault?

Get it together, Instacart! You told me, "Mary, prepare to be amazed!" Well, I am amazed. I am amazed at how I can order grocery delivery and it can still eat my day.

Will I try this again? Yes, because the promo code gives you $10 off three different orders and I have two to go. Also I am credited $4 something for the lettuce. I will say this for Instacart, they have good customer service. The trick is to figure out how to report an issue but once you do that, they are very nice.

The only thing is, you do not want it to shoot your day. That is what you are trying to avoid by getting the delivery. I had all this work to do, plus I had to go to church at 5 p.m. for Gregorian chant practice. I did not feel I could budget all the time to go to Aldi and back.

The work went well, is the good news. So, worth it. I'll try this again, and report.

But one thing, could Aldi please start carrying wine?