The smoke clears in Paris 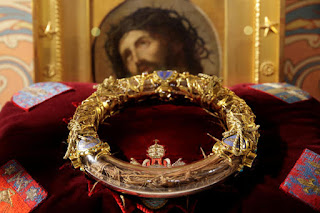 I am feeling a lot better about Notre Dame with the news that the relics have been saved and the ancient walls are standing and money is coming in to rebuild it.

Still probably not as much money as we here in Buffalo were given to put an addition on our Albright-Knox Art Gallery. As Howard would put it about the gallery, "What are they making it into, Dallas?" But still, impressive.

I am not going to be one of those Polyannas who go, "Oh, what the heck, all these churches all go through a lot, they're always burning," etc. This is the 21st century when we have a lot more firefighting resources than we had 500 years ago. The cathedral is in ruins. I still cannot help crying seeing video of Parisians on their knees in the streets, Rosaries in their hands, singing songs to Our Lady, or should I say Notre Dame, as they watched the cathedral burn and feared this was the end.

But at the same time that makes me think that good things can come out of bad and one thing we might see in Paris is increased faith. It is unfortunately human nature to take a church like this for granted until all of a sudden you think it will be taken away from you.

Notre Dame heard their prayers and interceded and God spared the cathedral, is all I can think.

A few other good things ...

1. You have to love that amazing daredevil priest who ran into the burning cathedral, damn the torpedoes, to save the Blessed Sacrament and the Crown of Thorns. Father Fournier. I am a fan.

2. Who knew that Notre Dame was in possession of the Crown of Thorns? I did not, I will tell you that, and it blows my mind. We have all learned things out of this. Apparently King Louis IX bought it in Byzantium back in the day for some gigantic sum of money.

3. And you have to love the priest for dashing to get the Blessed Sacrament as well, for having his priorities more straight than I would probably have them under such pressure.

4. It is great to hear news readers on TV talking of the tunic of St. Louis and other obscure medieval matters of faith.

5. The organ seems to have made it.

6.  Can I add something Buffalo? Reading back on what I wrote yesterday when I was in pieces, something else cool strikes me. I was irritated, as I wrote, at the long lines for confession, because I realized early in the day I would not get my chance, and I had to come back later. But upon reflection, reading back, it hit me ...

... There were lines for confession! How cool is that?

Maybe it will be that way in Paris. Maybe they are already lining up.

I would, if I were they.