The burning of Notre Dame 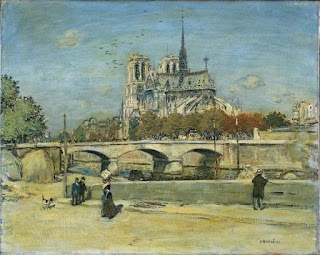 The burning of Notre Dame Cathedral -- as I said to a friend, there are no words.

The news came to me, as news like this does, in the middle of a hurried and mundane day. I was just coming from the dentist -- which, incidentally, was supposed to be today's story, and a great story it is, but it will have to wait. I had just gone to Albrecht Discount -- another story that will have to wait for another day -- and I got back in the car to head downtown to St. Michael's to go to confession because I had tried to go before the dentist but the lines were too long. As I turned onto Main Street from the Aldi parking lot I turned on the car radio and that was when I heard.

I could not, cannot believe it.

I have been to Notre Dame, thank God, but you just cannot imagine a world with it gone. As I put on Facebook it makes you wonder if the wheels really have come off in Europe.

As I wrote to someone on Facebook, what in the world kind of carelessness could have caused this?

This is Notre Dame! As in the old painting up above. As in a thousand old paintings. People over almost a thousand years have looked up at it, have walked in its shadow, have admired its beauty.

How could this have happened?

I guess it is best if it were an accident because then there is nobody to blame directly. But an accident is ominous in its own way. Perhaps as a friend said it was miraculous that Notre Dame never burned before. But the fact remained, it never did.

I have always thought of Notre Dame as a kind of cousin of Germany's Cologne Cathedral. As I told a friend, you can picture the two of them going through the centuries together. They were reminders of how although their respective nations were often warring, there was this faith in common.

It is hard not to see it as a metaphor, as some kind of warning. I am feeling this especially acutely because yesterday for the first time I saw "The Passion of the Christ," the Mel Gibson movie. That was one reason I was on my way to confession, that I was making it such a priority. I had these images in my head. I was thinking of times when I had laughed when I should not have laughed and mocked things I should not have mocked and in general behaved with stupidity and disrespect and that is why I was heading to confession. It is like what I have heard happened when people saw "The Exorcist" -- they went to confession. "The Passion of the Christ" had some stuff in it that can make you think of "The Exorcist." That is something too for another day. The point is, I had been upset this morning when the confession lines were too long and were moving too slowly and I had to get to the dentist. I had made up my mind to go back later.

Then I hear this.

Let me tell you, I not only went to confession, I stayed for the entire Mass!

Where, I should mention, they prayed for the burning cathedral. The priest mentioned it during the Prayer of the Faithful, and I was so grateful he included it.

It is just unbelievable, in this day and age. I know, churches have always burned through history, but we have better equipment now, and better fire detection, and better everything.

Well, not better everything. Sometimes you have to wonder.

Today I wonder. It is just so ominous, so unthinkable, that cathedral in ashes.

Well, I am talked out. I was writing things on Facebook about it and Facebook friends, so many of them are such beautiful people, and they were chiming in with thoughts and sympathy and their own grief -- not just Christians, either, but other people, too, who sent their love. They made me feel good that I was not alone and we went back and forth and back and forth and on and on, as you can tell from me writing here repeatedly, "As I said to a friend...." Now I have a kind of emotional hangover from it all. I guess I should let it go. I guess I have to let it go.

But tough day, you know? That was how my sportswriter friend Budd Bailey put it. Sportswriters have a way of distilling things to their essence.