The thrift shopping we do in the spring 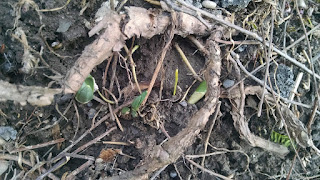 Even though it's freezing out I know it is spring.

There is the matter of the daffodils, up above. It may take a sharp eye to spot them but they are there!

There is also the matter of  I cannot stay away from thrift shops.

I have a lot of work to do so I do not go special. But I work in a quick stop on my way from somewhere I have to be. For instance yesterday I went to the chiropractor. On my way home I could not resist popping into Goodwill.


Hardly had I stepped inside when from across the crowded room I saw it -- a gigantic framed print of John Singer Sargent's "Daughters of Edward Darley Boit." Here is a picture of it from the Boston Museum of Fine Art, where I believe the picture lives. 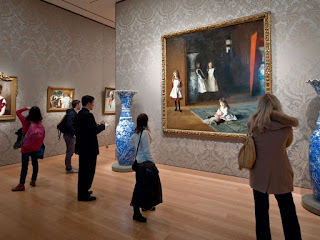 And I have to say, it was darn near as big as in that photo. And framed the same way, too. I recognized it as soon as I walked in. I have been studying Sargent recently because I have been noticing that he and I have in common certain ways of thinking and perceiving things. Howard laughs at me because I am cooking dinner and listening to curators and other eggheads giving lectures about him.

Back to "Daughters of Edward Darley Boit." It was $15, purple price tag, darn.

Where would I put it? That was another consideration. I just have so much stuff, you know?

I could have overruled both those considerations. However, that fine ostentatious frame was chipped pretty visibly in spots. That was what finally made me make the decision I did, which was ...

That evening Howard said, "I'm surprised you could resist it."

Howard asked, "Was it an original?"

I said, "Howard, no, it was not an original! People pay millions for this guy's stuff!"

I had to pause to imagine the greatness of the situation were I to be able to reply, "Yes, it was an original. And I like the idea of having an original Sargent. But where would I put it? And it had a purple price tag --

Howard stuck to his guns. "It could have been an original. You never know. People don't know what they have in their houses."

Watch, he will turn out to be right. The Boston Museum of Fine Arts will all of a sudden report that "Daughters of Edward Darley Boit" is missing.

And here it is at the Town of Tonawanda Goodwill. Turned down by me because the price tag was purple and not yellow.

Howard would sure have the last laugh!