The five people you meet on Ash Wednesday 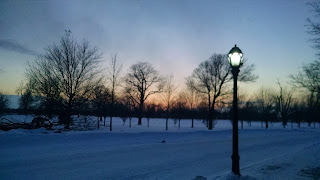 This is a an uncompromising Ash Wednesday. As my brother George said it does not matter that it is the middle of March, it is the dead of winter.

I took that picture yesterday before my fingers froze and my phone died.

Ash Wednesday stresses me out so much that I cannot be around people. Today instead of going to my usual church I went to St. Benedict's for my ashes. I have done that other years too. Every time I go there, I behold things that amaze me.

St. Benedict's as I have written before has a free-wheeling Ash Wednesday atmosphere. Laity distribute ashes. A girl welcomed me at the door with a bright smile and an invitation to check out their prayer resources, also there was a priest hearing confessions, and --

Suddenly the priest was at her elbow. "I was just going to say, I'm going on break," he said.

Ha, ha! He must have seen me approaching!

I went to get my ashes from this one lady who administered them simultaneously to me and to this big handsome guy my dad would have called "Mountain Man." We had to recite a psalm together.

All the while this girl was at the piano -- they have a piano at St. Ben's -- playing New Age music. That is the way this church is. It just is.

Now comes the greatest thing. After getting my ashes I was kneeling in the pew trying to pray the Rosary, which I try to do every day anyway. And right in the middle of a decade, which for the record was the Assumption of the Blessed Virgin Mary, this young man approaches me.

And I figured he did. Because I am terrible with names and I am always embarrassed about it. But luckily all I did was say "Hi!" in return, and smile back.

Then I realized he was doing that with everyone. He would call out "Hi!" or "Hey!" exactly as if he knew them! And sometimes he would say, "Welcome to St. Benedict's," sometimes not.

He was not this dweeb, either. He looked like a popular kind of party guy. I admired him for taking on this role so fearlessly. Then what happened was, the girl at the piano began singing from her distant corner. You could not really hear her so this guy began chiming in, helping out.

"Lord, be with me, I can't do this alone," was one lyric, I think. I can't really remember. I was too awestruck.

I have never seen anyone with such self-confidence! He was just sauntering around the church, doing his thing.

Next to him, we are all mere church mice!