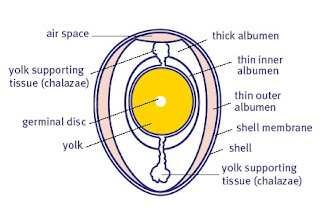 This morning, a miracle!

I opened the fridge to get out an egg, and it was kind of early and I was really sleepy so I dropped the egg.

Oh no! That is one messy task. I am preparing myself for this messy clean-up but then ...

The egg did not break!

It was sitting on the floor whole!

I picked it up, gingerly, astonished. What had happened was, the shell had chipped away just a bit on one end. But the membrane underneath somehow held the egg together.

I've never seen anything like it in my life!

He ate the magic egg!

Maybe the egg was a sign because the rest of the cooking and coffee hour baking went magically.  The folks at coffee hour tomorrow will be happy! I made Cranberry Buckle and Jewish Apple Cake and a creation of my own, Chocolate Strawberry Coffee Cake. I made cinnamon buns. Everything went really fast.

It was like a clock, that stick of butter. I could mark time with it.

Anyway, a productive day, in and out of the kitchen.