The art store to end all art stores 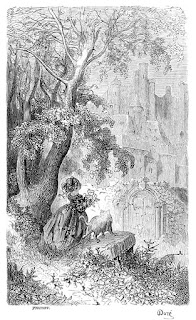 The most wonderful and terrible thing has happened. The nation's biggest art supply store has opened about a mile from my house.

I mean, I could walk there!

Not that I am going to. I will have to do the ugly American thing and bring the car. Because of all the stuff I will buy there!

It is this magical place. It is just a big old steel building in truth, but in spirit, when I encountered it ... well, it was just as in the picture at left, by Gustave Dore, may I point out.

How did this happen??

I speak, of course, of Hyatt's All Things Creative, a family-owned Buffalo store that has been around forever except I never went there. Do not ask me why I never went there. What it was, I think, was that you had to go out of your way, and I was in the habit of going other places, and you had to pay to park because it was downtown, but it was not quite downtown, not so I could walk there easily on my lunch break, and --

Who cares why I did not go there. The point is, now it is practically right next door, and in a part of town where I live half my life. The gym I go to is there, and the Amvets I go to, and Albrecht Discount, and, well, everything.

It is a struggle not to go there all the time!

I have been there only once so far. I made the mistake of going there several days ago with Meghan, my friend and sketching buddy. We took this selfie of ourselves entering the store. 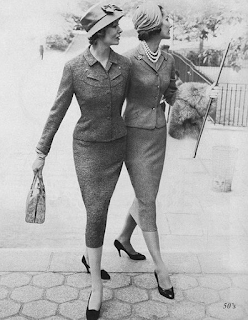 Well, it was not really a mistake because had I not gone with Meghan, I would still be there.

I cannot wait to go back by myself and just wander forever. It has taken a great force of will not to. Because I could not believe my eyes.

It is being described as the nation's biggest art store and I am not going to argue. There were watercolors there that I had never seen in person! That is what I told Howard. Paints I had only heard about but never seen.

There was about a quarter of a mile devoted just to journals!

By the time I left -- peacefully but reluctantly -- I was beginning to agree with people who have been telling me I should illustrate my book on Leonard Pennario. I have to give myself an excuse to go this store!

But how I would I work in a picture along the lines of Arthur Rackham's "By Day She Turned Herself Into a Cat"? 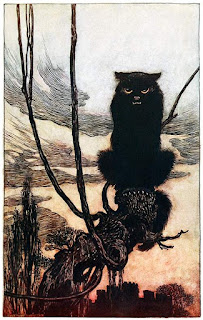 That is the question. And it must be answered because if you cannot aspire to a picture like that, what is the point?

Once I answer that question, though, one thing is certain:

I will have what I need!