The first "The Sound of Music"

It was a German movie, made in 1956 and based on Maria von Trapp's memoirs. It's fascinating to see. You don't have the songs, of course. But I was surprised by how well I liked it. I haven't watched the whole thing, I must admit. I watched it until a little bit after their wedding. But still.

The Maria in this movie looks sort of like Julie Andrews. She was a German actress named Ruth Leweurik. Being a classical music nerd I happen to know she was briefly married to my favorite singer, the baritone Dietrich Fischer-Dieskau. Watching the movie I see why. What a beautiful actress. She died last year at 91, yikes. But anyway...

There is a beautiful scene where Maria is leaving the convent and hears the nuns singing the Salve Regina. We sing that Salve Regina a lot at St. Anthony's. It is fun in the wedding scene how the sisters get Maria dressed up and it looks as if the Mother Superior is giving her away.

Also, being that today I put up my Christmas tree, I have to alert you to amazing Christmas footage in this movie. It begins 33 minutes in.

You have Captain von Trapp, up on a ladder, trimming this gigantic Christmas tree. By the way, this Captain von Trapp, I do not know who he is but he is really cute. Really. Actually the scene where he and Maria fall in love is as good as in "The Sound of Music."

Anyway, back to Christmas, you see him up in this ladder, attending to this big tree. Then you have the candles on the tree. And the singing of Christmas carols. All in this breathtaking mansion. Then Christmas Eve with all these presents, and a lavish dinner. ...

Immediately I set about putting up my tree and doing the lights just right. Here is a trail of lights leading up to my Christmas tree for the great work of art in progress. 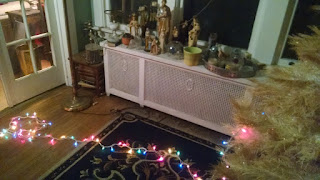 There is no way in the world that I am going to measure up.

But I must try!

Email ThisBlogThis!Share to TwitterShare to FacebookShare to Pinterest
Labels: The Sound of Music