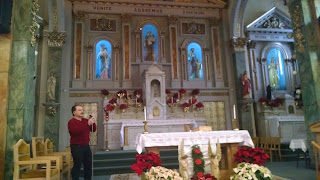 I wish I had been doing a better job of chronicling my Christmas season. I will get better at that!

Meanwhile, I have been having the best time. Besides getting done things that need to get done, I have -- let me think -- gone tobogganing at Chestnut Ridge, gone cross-country skiing in Delaware Park, baked cookies, painted my own Christmas cards, had a Tom & Jerry's at Rohall's Corner, gone Christmas caroling TWICE, with 20 friends each time -- and what else? I made peppermint ice cream with my niece. I have been enjoying all of the Celestial Seasonings Christmas teas. On a dramatic snowy night, I viewed the Festival of Lights at Our Lady of Fatima Shrine.

This morning, going to Mass at St. Anthony's, I got to tell people "Buon Natale."

We did not have a coffee hour today, it being Christmas Eve, and a lot of people being in too big of a hurry. I was not one of those people! Had I had my druthers we would have held the coffee hour. But anyway, I hung around long enough after Mass to greet the people arriving for the next Mass, the Italian Mass.

And I got to tell them "Buon Natale!"

"Buon Natale," I told my friend Peter LoJacono, who was setting up for the Mass. That is he in the picture up above! I did not mean to take his picture but he turned up in it. Peter said it back to me and he said it beautifully and musically and authoritatively, so I got to emulate him.

In front of the church when I was leaving I greeted people coming in.

"Buon Natale," I sang out, hoping I would sound like Peter.

And I must have succeeded, because this couple coming in totally acted as if it were business as usual.

"Grazie, grazie," the husband said. He and his wife then wished me Buon Natale.

Is that great or what?

You could shell out to go to Italy or you can do this.

Surely Leonard Pennario was looking down on me smiling, this being the church where he was baptized and everything. He loved Christmas, and still does, I am sure. It is funny to think I was with him 10 years ago tonight on Christmas Eve. You do not have to ask what we were doing. We were eating!

And I was wishing him Buon Natale!