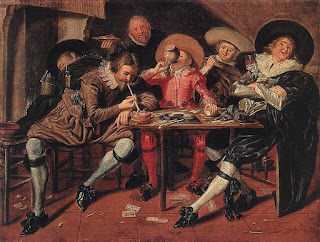 A friend from church pointed out to me a few days ago that our priest, Father Justus, would be celebrating his year's anniversary with us.

It felt like just yesterday he got here.  I wonder what it feels like to him. Probably 10 years HAHAHAHAHAA.

Anyway we swung into action and today we had a special party for him at the breakfast after Mass. One of our number brought in this loud purple cake. I have never seen frosting that purple. Another friend brought a beautiful festive cake piled high with snow-white frosting.

And this is the greatest: Our friend Joan put together a bag of goodies for Father Justus. He lives at St. Rose of Lima with a few other great priests we know and Joan had put together this man-cave assortment of treats. There was a six-pack, this being Buffalo, and Father Justus liking beer. And Doritos and other chips and nacho cheese dip and pretzels, all this stuff that guys eat. Joan is a genius! Above is a picture of the party at St. Rose of Lima they will have with the gift pack.

But back to time flying. Here it was today 90 degrees. The church had that deep summer feel, the fans oscillating, the doors open. The men sweltering in their suit jackets. Hats off to them for keeping their jackets on, you know? I do not know how they do it to be honest.

And it was just a few months ago that it was 5 below zero! I remember that distinctly because by that time I was helping with the coffee hour, and I got there early along with a few other people, and we were all laughing and waving at each other because of the triumph we felt, getting there on this morning when it was 5 below zero. I think that was in March. It was not long ago.

Buffalo, you cannot say we do not get our seasons.

I hope Father Justus is enjoying it!
Posted by Mary Kunz Goldman on June 26, 2016

I'm not Catholic but - what the hell - I liked your post!!!! Thank you for the lovely, easy-on-the-brain writing. (I mean it as a compliment, of course!)

MUSE, you are so nice and I love to be called easy on the brain. I would never take that the wrong way. Thank you!!