Because I have been baking more for church coffee hour, I did a wild and adventurous thing and I went down to the cellar to find my Hamilton Beach mixer.

I do not think I ever mentioned that I owned this particular small electric. I bought it at Salvation Army for I think $10. Since doing a little research I have learned it is a Model K! Here it is posing on the kitchen counter. If you look closely you can see the 1960s Osterizer in the background. 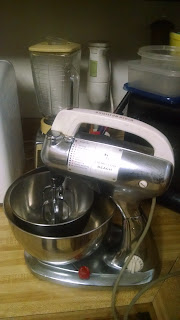 The Model K dates to the 1950s as I understand it. This mixer runs like a dream -- however zut alors, I am missing the turntable! That is what I have learned the part is called that the bowls sit on.

I know that my nieces Rosie and Millie were working this mixer once when we made Christmas cookies. So I knew it had been in service. Alas and alack and Alaska, I searched the basement but found no mixer turntable. I wonder if it ever had one, I mean while I have owned it. I have dim memories of us jerry-rigging it.

I must needs find a replacement turntable. That should not be too hard to do. And good news: While I was searching the basement I found a World War II-era Sunbeam Mixmaster I did not know I had! This is why it is fun to be me. 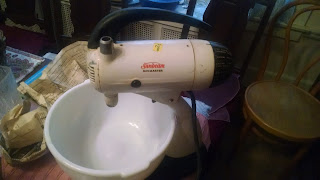 The Sunbeam runs very well too! I plugged it in. It is sluggish for the first few settings, but those are Mashed Potatoes and stuff, which I would never use it for. By the time you get to the beating it is going great guns.

However! It too is missing its turntable! Which must have been why I got it for just $2. The price sticker is still on it.

The beaters were wrapped in newspaper dated June 2008, so that must have been around when I bought it. I have dim memories of being at a sale with my mom and picking this up. Knowing my mom we talked it down to $1. Ha, ha!

I love the front of it. It is a Model 9 which dates to 1947 and was known for its grille. It looks like a World War II airplane! 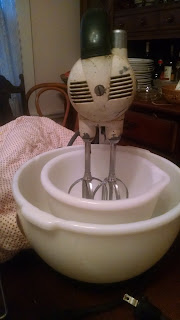 Finding a turntable for this baby should not be that hard either. It seems people charge more for the bowls, which are beautiful white milk glass. The only thing that bothers me is the outside chance that I could have thrown one or another of these turntables out without knowing what it was. I have said it before and I will say it again: NEVER THROW ANYTHING OUT.

Leonard Pennario agreed with me on this. We had both thrown things out and regretted it.

Anyway. I look forward to baking for my church with one or both of these vintage instruments whirring away.