The turkey big as Turkey 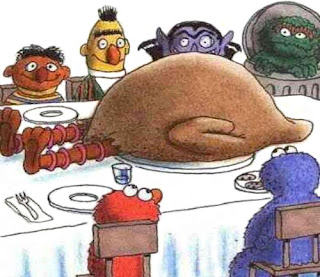 That Sesame Street scene above, that will be my Thanksgivinv table this year!

Because I went to Tops and bought the biggest turkey.

This turkey is so big that action halted at the checkout. The clerk looked at it and gasped. The clerk's name tag, by the way, read Israel. That must be an adventure to have that name! I wonder if when he goes on break his fellow employees make jokes about ransoming captive Israel.

But back to my turkey.

The Buffalonian behind me in line also got involved.

I said modestly: "I had to look hard for it."

A 24-pound turkey is not the biggest turkey in the world but it was the biggest to be had at Tops. And I was lucky. Last year they were smaller. It is funny because the food magazines always use a 12-pound turkey as a guide.

Food magazines, that flaw aside, are fun at Thanksgiving. It is no wonder I capitulated on Cooking Light the other day.

You are guaranteed recipes for humble vegetables I love, like cauliflower and squash and Brussels sprouts. Sometimes even cabbage! Sometimes even rutabaga.

Desserts are down-home and use cheap fruits like apples and pears. No macadamia nuts or cocoa nibs.

In the middle of it is the traditional, cheap, all-American turkey.