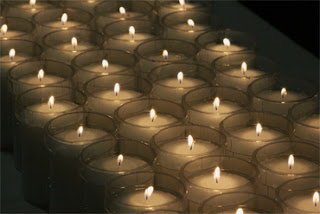 It is too bad that the Catholic Church has pretty much dropped the ball on All Souls Day, leaving people to associate this day only with the Mexican version of this ancient feast. The Mexican All Souls Day is the Day of the Dead and that is all you hear about.

That is too bad!

A few years ago we got to have All Souls Day masses at St. Anthony's and they were tremendously moving and powerful.

The sermon was usually about how we were all heading toward death at breakneck speed.

They have this black coffin called the catafalque surrounded by candles and the coffin stands for all your departed loved ones. And the priest would do a Solemn High Requiem Mass. With all the candles lit. There was an unbelievable moment of silence at the end when he would bless the catafalque with incense. He would walk around it in complete silence as everyone watched. You would look on and pray for your own personal loved ones. I remember thinking of Leonard Pennario. And my father, and my Auntie Rose, and my Uncle Bob.

I will never forget that! Good thing because I do not know if I will ever get the chance to see it again.

But oh, I loved it while it lasted!

There was 2009 and the kid in the hip-hop outfit. You never knew who would turn up at the All Souls Day Mass! It was more popular than you think.

Hmmm. I see that year that I had marketed the Mass, telling people to show up, that they would not feel conspicuous, that they would be fascinated by the rite if only for anthropological reasons. Perhaps that kid read that! Wow, that was funny how I overslept that year, after gaining the hour. All the things you forget. This is why God created Web logs.

The year 2010 was when I claimed my Plenary Indulgence.

And in 2008 was my first All Souls Day Mass ever, at least that I can remember. I could not get over it.

It is a Catholic tradition to pray for the dead as we discussed in the 2009 post "Fatlings and Fuggers." And the All Souls Day Mass was such an opportunity to do it. It is a pity the tradition is so lost. No more Latin High Requiem Mass. No more catafalque surrounded by incense.

And now, the music.

I called the parish office hoping we would have an All Soul's Day Requiem this year. I was disappointed to say the least. :(

Bing, that was good of you to call. Maybe next year!